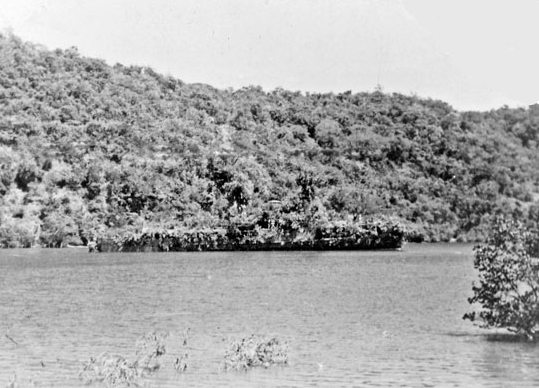 I guess that’s the whole point of camo, you just never really know what you’re gonna see.
In February 1942, the Dutch minesweeper the HNLMS Abraham Crijnssen survived the Battle of the Java Sea, in which the Japanese Navy crushed Allied forces [AU, UK, NL, US] and invaded the Dutch East Indies [aka Indonesia].
To evade detection from the air and retreat to Australia, the Crijnssen‘s captain ordered the 186’ ship disguised as an island by covering it with branches.
Unlike the official, formal Razzle Dazzle camouflage technique used in WWI to confuse submarines, the Crijnssen‘s improvised approach worked. The ship survived and eventually ended up in the Dutch Navy Museum at Den Helder, the city at the tip of the North Holland peninsula which has long been a strategic nexus of Dutch naval and shipping operations. 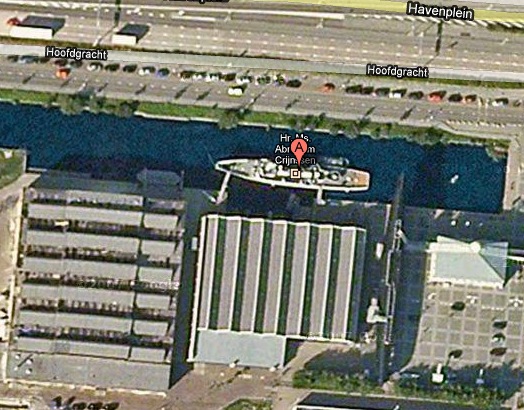 In fact, when you look up the Crijnssen on Google Maps, there turns out to be a huge complex of Dutch Polygonal Camo just to the east, the main base for the Royal Dutch Navy. 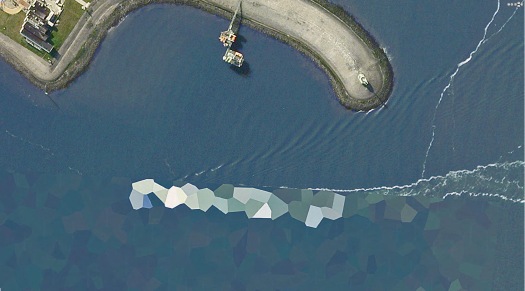 And the camo extends out into the water in order to cover a ship caught by Google’s Aerodata photographers just as it passed by the world’s most undeniably phallic breakwater. Wonder what the sailors’ nickname for that is.
Here a Google Map with both generations of Dutch naval camo, side by side: