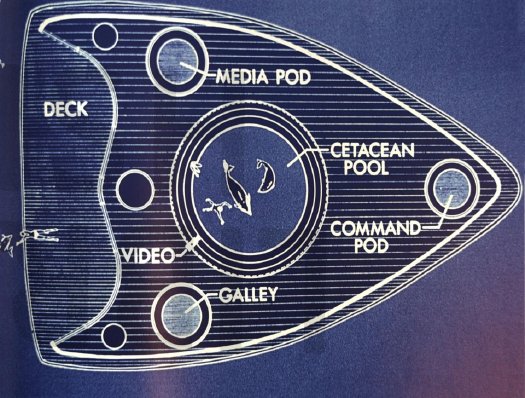 The architecture and art collective Ant Farm first proposed The Dolphin Embassy in Esquire magazine in 1974. When they ended up meeting the owner of the Dolphinarium in Australia a couple of years later, they worked it up into a full-fledged proposal, which got funding from the Rockefeller Foundation and a show at SFMOMA.

Basically, the idea morphed from an underwater building into an open, mobile laboratory craft [above] to facilitate human-dolphin interaction in the wild. [spatial agency has images of both early designs.] First, they would deploy the awesome power of video technology to create a common language with the dolphins. Then…

Here’s Ant Farmer Doug Michels talking about the project with Connie Lewallen in the catalogue for the 2004 retrospective at Berkeley Art Museum:

The next year and a half for me [from 1977-8] was filled with trying to make the Dolphin Embassy real. There was a lot of time spent with both captive and wild dolphins and researching dolphins, a lot of design time on the boat, and a lot of public relations time communicating the dolphin idea to Australia. Putting it in historical context, we were feeling pretty confident about accomplishing things. The House of the Century had been built, Media Burn had been done, The Eternal Frame–these large-scale productions. Cracking the dolphin communication code, well, how hard could that be?! (Laughs.) 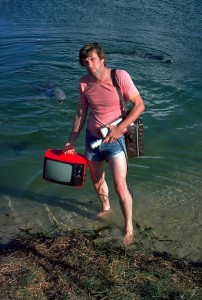 CONNIE: Why didn’t the Dolphin Embassy get built?
DOUG: Eventually, it became clear that it was a gigantic project beyond the scale we could accomplish with the funds we had raised. While we didn’t solve cetacean communication during our mission in Australia, the Dolphin Embassy experience provided a deeper view into the mysteries of Delphic civilization.

A few months ago Andrea Grover posted this great 1976 photo of a TV-toting Michels having a diplomatic summit of some kind with his dolphin counterpart. Not sure what they discussed.

From the disbanding of Ant Farm in 1977 up until his unexpected death in 2003, Michels kept developing the Dolphin Embassy concept. By 1987, it was retitled Bluestar, a joint dolphin-human-compatible space colony with a 250-ft diameter sphere of water “ultrasonically stabilized” within a wall of space-made glass. My merely 100-ft satelloon bows in awe at the thought. 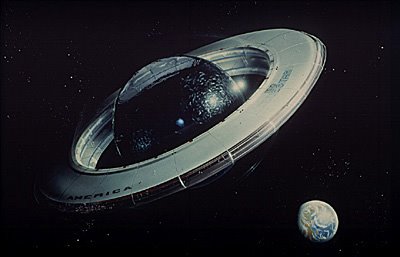 Anyway, I’m reminded of all this now because, with the iPad and all, it may be time to dust off those Dolphin Embassy blueprints.