So I’m reading along in my new copy of Gerhard Richter: Writings 1961-2007–which is pretty awesome, and which does appear to supersede the artist’s previous collected writings, The Daily Practice of Painting, which is good to know, but really, what to do with all this information?–and I come across this discussion of glass and mirrors and readymades in a 1993 interview with Hans Ulrich Obrist, and I’m like, holy crap!

When did you first use mirrors?
In 1981, I think, for the Kunsthalle in Dusseldorf. Before that I designed a mirror room for Kasper Koenig’s Westkunst show, but it was never built. All that exists is the design–four mirrors for one room.
The Steel Balls were also declared to be mirrors
It’s strange about those Steel Balls, because I once said that a ball was the most ridiculous sculpture that I could imagine.
If one makes it oneself.
Perhaps even as an object, because a sphere has this idiotic perfection. I don’t know why I now like it. 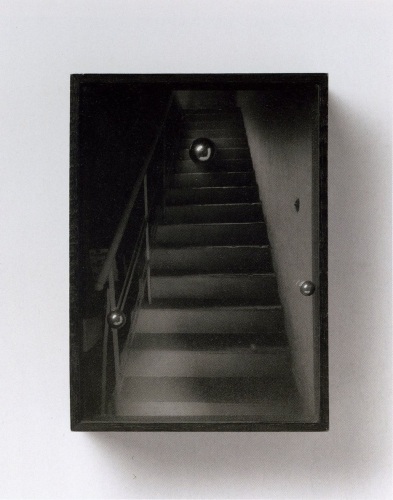 Kugelobjekt I, 1970, image: gerhard-richter.com
And anyway, on the next page, Richter explains how all the work on the dimensions and framing and installation of 4 Panes of Glass meant it’s “not a readymade, any more than Duchamp’s Large Glass is,” when he goes,

At one point I nearly bought a readymade. It was a motor-driven clown doll, about 1.5 metres tall, which stood up and then collapsed into itself. It cost over 600 DM at that time, and I couldn’t afford it. Sometimes I regret not having bought that clown.
You would have exhibited it just like that, as an uncorrected readymade?
Just like that. There are just a few rare cases when one regrets not having done a thing, and that’s one of them. Otherwise, I would have forgotten it long ago.

And I’m like, the clown! the clown! I swear, I’d written about it before, but I can’t find it anywhere. And then I realize I’d written about it for the NY Times in 2005.
Previous most ridiculous sculptures I could imagine: The International Prototype Kilogram or Le Grand K, and the Avogadro Project
UPDATE:, uh, no. Richter has more balls than I thought.