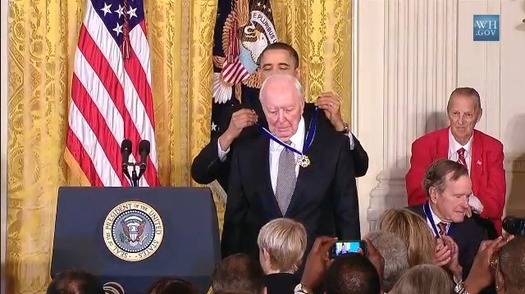 Johns, Flag: “American artist Jasper Johns has produced a distinguished body of work dealing with themes of perception and identity since the mid-1950s.” –whitehouse.gov
I’ve been trying to get a better sense of the first decade for Rauschenberg’s Short Circuit, from the mid-1950s, when it was made and first shown, until 1965, when the Jasper Johns Flag was removed from the work which had originally been titled, Construction with Jasper Johns Flag. It happens to be the time when both artists’ careers skyrocketed; when their intense personal relationship flourished, then fell apart; and when they were creating arguably their most significant works. And one of the people who was there for all of it was Alan Solomon.
Solomon was a curator and friend of Leo Castelli; he showed both Johns and Rauschenberg–including Short Circuit–in March 1958 at Cornell University’s White Art Museum. More on that later.
After he moved from Ithaca to the big city to run the Jewish Museum, Solomon gave Rauschenberg his first solo museum show in 1963. And he did the same for Johns in 1964. And he curated both artists into the US exhibition at the Venice Biennale in 1964, which erupted into controversy when Rauschenberg won. [The controversy was nominally about the eligibility of the US show, which was mostly installed in the former American consulate next to the Guggenheim, and only partly in the US Pavilion. But basically, it boiled down to Europeans being pissed at the American bad boy winning. I think.]
Long story short, Solomon was a key, early supporter of both artists’ work, and throughout the 1960s, he regularly made the argument that Pop, which he was also instrumental in promoting, was born directly from the work of this pair of “germinal artists” Rauschenberg and Johns.
Which is funny, because reading through Solomon’s texts, speeches, and interviews, you wouldn’t know Johns and Rauschenberg were even dating, much less spawning heirs. Though he showed the collaborative combine painting itself in 1958, Short Circuit is completely absent from Solomon’s exhibitions, texts, and interviews in 1963, ’64, and ’66.
What is present, in catalogue essays for both artists, is Solomon’s repeated and unequivocal rejection of the personal, the emotional, the biographical, the expressive, almost any type of subject or subjectivity at all, in fact, in their revolutionary work.
Looking back at the critical content closet Solomon constructs around these artists and their work–constructed with, you have to assume, their blessing and even active involvement–it’s tempting to take everything he says and simply invert it, and feel like you’re getting a clearer picture of what’s going on.
When Solomon writes of the importance of “other possibilities” to appreciating Johns’ Flags, while explicitly excluding the possibility of any personal associations, it almost seems like an invitation, a demand to consider them in an autobiographical light, as a kind of silent self-portrait. Which becomes very complex very quickly when the germinal Short Circuit re-enters the mix.
But I still have to figure out how, what, or whether to write about that head-on.
For right now, here are a couple of excerpts from Solomon’s catalogues for each artist. Johns first:

The mature work of Johns begins with the first Flag, painted in 1955. Since he has never shown anything done before this, the extraordinary initial impact of the flag image and the authority with which it is painted give the impression of a finished artist, suddenly sprung from nowhere. Strangely enough, the image did come to him that spontaneously; he explains simply that he dreamed one night of painting a large flag! However, this by itself does not explain Flag, and Johns does not choose to discuss how he arrived at this point. His reticence is consistent with the way he presents himself to us: he wants his own identity, his feelings and his intentions to be wholly detached from the work.
This attitude of detachment is one of the keystones of a deeply committed philosophical position; consequently his paintings can never be considered personal or what he would call sentimental, that is, conveying subjective meanings or associational attributes which might involve us in anything but the expressive potential and the isolated existence of the objects themselves, in the immediate context of the work of art.

I was going to add italics to the incredible parts, but it’s every single thing.
I like how Solomon acknowledges that Johns’ story of the dream is a way to close off discussion of the origins of Flag, though. An instance of reticence as communication:

It must be understood therefore that his pictures, before everything else, have to do with the avoidance of specific meanings, with the necessity for keeping the associational and even the physical meaning of the image ambiguous and unfixed. This attitude should not be regarded as a denial of responsibility, but rather as a positive affirmation of the need for questioning established values in order to arrive at newer and richer values, and it is in precisely this sense that Johns represents a major point of departure for a while new generation of artists.
…
To a large degree, Johns depends on the simple principle of antithesis as a means of reminding us that there is always at least one other possibility in any given situation. Coming back to the Flag, we find this principle stated so clearly and positively there at the very beginning that the picture carries the force of a visual manifesto.

Solomon goes long and deep on what has become the standard interpretation of that manifesto: “Is Flag a painting or a flag? Yes!” Yes, but there may be at least one other possibility.
Here’s Solomon on Rauschenberg’s “mature” work, beginning with the combines. Solomon notes that except for when he uses “such complete objects as birds or photographs” [but not, apparently, paintings], Rauschenberg prefers to work with “fragments which tend to suppress the true identity of the objects”: 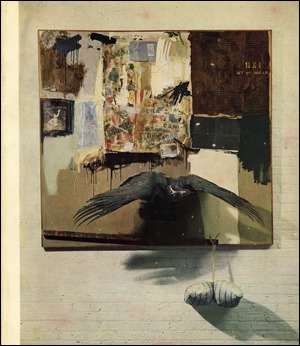 The objects used by Rauschenberg have a high associative potential, because the are so powerful visually, because they are so manifestly decadent, or perhaps because they have been intensified by the artist in such a way that they become tawdry or repulsive and therefore provocative. The setting of such images side by side might at first glance seem to be the result of an anecdotal intention; this possibility appears to be even clearer in situations like that in Canyon [1959, left, on the catalogue cover], for examples, where we find a color photograph of the Statue of Liberty, and where we can read words like “LABOR” and “ASSOCIAL.”
However, it is not true that the combines are intended to be anagrammatic statements of ideas, as it were, which we are expected to puzzle out and which will reveal their meaning to us if we succeed in fitting the pieces properly. There are no secret messages in Rauschenberg, no program of social or political discontent transmitted in code, no hidden rhetorical commentary on the larger meaning of Life or Art, no private symbolism available only to the initiate.
The enigmatic confrontations which he poses for us seem to demand explanation, and they force us to examine them more closely, to search for the key, to look. Their real meaning is contained in this simple fact, since the more we look, the more we are faced with the complexities of meaning. In this way the paintings constantly renew themselves; their real virtue lies in their multiplicity, and Rauschenberg’s images have been chosen to maintain that condition of pictorial and psychological tension to which I have already referred. Resolution would destroy this tension, and the elements chosen never admit the possibility of logical interpretation or elucidation, either in themselves or in relation to the things with which they have been combined.