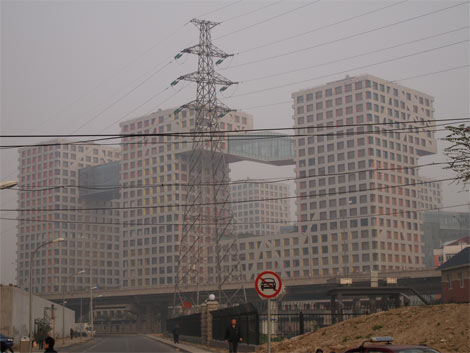 So Dan Hill’s posted another of his typically incisive analysis of an urban situation. This time it’s his extended and engrossing account of visiting Linked Hybrid, the massive urban development in Beijing, designed by Steven Holl Architects, which was just opening at the time [late 2009]. 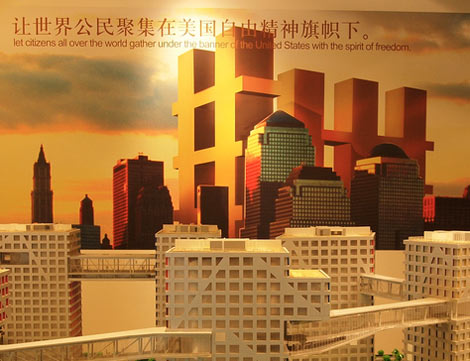 above and top via cityofsound
After being repeatedly shooed away by gun-toting guards from what Holl had pitched as “an open and porous public space,” Hill found his way in, and eventually ended up in the marketing office where there’s this poster of–what to call it without sounding utterly inappropriate? A bombshell? A landmine? A plane flying into a tower?:

More incredibly again, the adjacent wall features another poster of exaggerated Hybrid-like building on an urban skyline, under the phrase:
“Let citizens all over the world gather under the banner of the United States with the spirit of freedom.”
What can this possibly mean in this context? The absorption of the brand of ‘starchitecture’ is easy to see in a culture shifting through the gears of consumer culture, but of the brand of the United States?

That’s no moon. It’s the proposal for Memorial Square, the World Trade Center site put forward in 2002 by Holl, Charles Gwathmey, Richard Meier, and Peter Eisenman, or as they called themselves at the time, the Dream Team.

Memorial Square, 2002, “Dream Team,” image via renewnyc.org
At the time–the day after the unveiling, actually, at a screening of my short film, Souvenir (November 2001), which was followed by Etienne Sauret’s incredible documentary short, The First 24 Hours–I recognized the form the Dream Team was proposing as a gargantuan evocation of the fragments of the World Trade Center’s facade.
They denied the reference, even as they awkwardly argued and edited around it on the Charlie Rose Show. But I think it’s self-evident. Anyone wanting to argue otherwise to me should read those two posts and the links within first. Then I’ll tell you my story about asking Eisenman about it face-to-face. 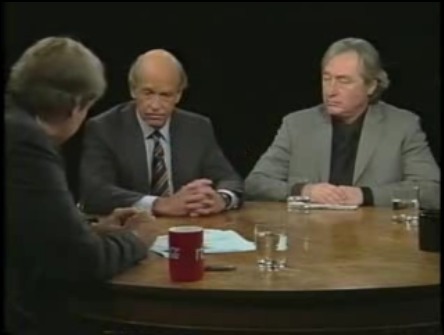 What’s fascinating now, though, in rewatching that Charlie Rose episode, is not the Dream Team proposal’s basis in the wreckage of the World Trade Center, but its multiple similarities to Holl’s Linked Hybrid. 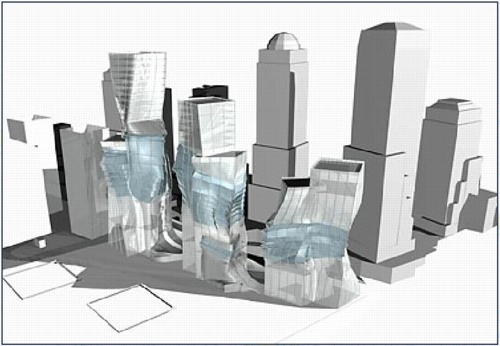 Holl and Meier especially discussed the Memorial Square proposal as primarily a public space, one which is entered from the city by “multiple portals.” Holl even calls the structure a “hybrid.”
While the Team took great pains to deny the proposal had any “signature” style, I would speculate otherwise. The overall concept of structure capturing “a moment” in history and memory comes from Eisenman’s proposal [above] for Herbert Muschamp’s WTC charette. 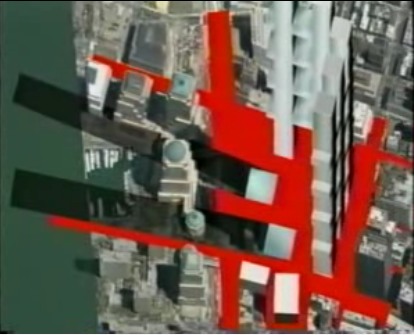 Meanwhile, the form is Holl’s, as is the idea that its entire surface would glow at night on one face. The rendering resembles nothing so much as the skyscraper cousin to Holl’s residence for the Swiss ambassador to Washington.
Dan Hill makes a persuasive critique of the simultaneous successes of Linked Hybrid as a structure and its failure as the open urban experience Holl envisioned. And it’s tempting to take comfort from afar and tut-tut the clunky shortcomings of Chinese modernization. But
are the urban and sociological failures of Linked Hybrid really any better or worse than the manipulated politicized mess that Daniel Libeskind’s World Trade Center plan has wrought?
I think the more sobering path is to recognize the remarkable extent to which Holl succeeded in realizing his Dream Team’s proposal for downtown Manhattan in Beijing–and to acknowledge that, there but for the grace of George Pataki go we.
Linked Hybrid’s marketers invite “citizens all over the world [to] gather under the banner of the United States with the spirit of freedom.” But on this day, when citizens all over the world gather to protest the continued imprisonment of Ai Weiwei, the co-creator [with Swiss architects Herzog & deMeuron] of the China’s most famous public building, the Bird’s Nest Olympic stadium, can we really say “our” public sphere is superior, or even free?
Architecturally speaking, at least, we are all New Yorkers now, and Beijingers, too.