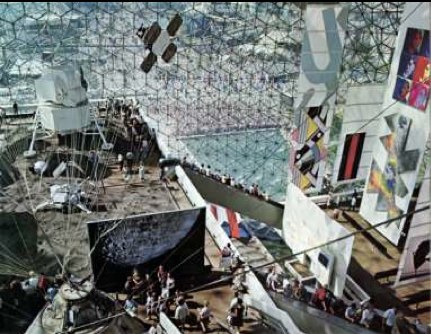 This interior shot of Fuller/Sadao’s US Pavilion at Expo67 almost has it all: installation view of the giant paintings Lichtenstein, Newman, Warhol and Johns made for Alan Solomon’s American Painting Now; plus a giant photomural of the moon, perfect for posing in front of.
There’s another photomural, earthrise from the moon, on the other side, which was a backdrop for the lunar landscape diorama. You can see it in Carl Harstad’s photo:
w 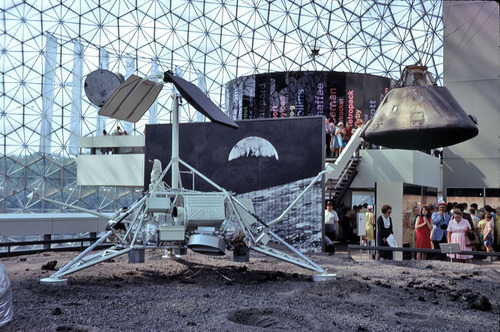 And the satelloon-like weather balloons were just out of both pictures’ edge. Fortunately, Bob Charlton’s mother captured them below: The underside approach for the lunar platform has this awesome installation [image from fan train’s flickr], a series of panels or canvases with abstracted elements of the American flag. It’s a little Ellsworth Kelly, a little Helio Oiticica, and a little Richard Lippold at Lincoln Center, all rolled into one piece of exhibition filler created, I assume, by Cambridge Seven. This other photo from Carl Harstad of the Hollywood section of Cambridge Seven’s exhibit features, what? I don’t know. I’d guess it’s left over from Joseph Manciewicz’s disastrous Cleopatra shoot, in front of a giant, multipanel headshot of Humphrey Bogart. 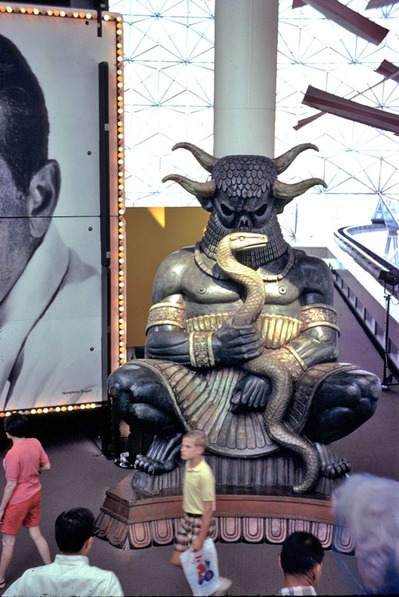 Cambridge’s exhibition carried the overall title, Creative America, and I think it very successfully steamrolled everything–paintings, photomurals, dioramas, film props, spaceships, cultural effluvia–into a single, unified, spectacularized drive-by aesthetic experience. And it was all done by and for the US Government. As I go on about reconsidering ‘non-art’ things like photomurals and satelloons in an art context, I keep coming back to the Expo67 pavilion. At one point, it was all art, or something like it. And vice versa.
[note: I’ve seen it elsewhere, but I took that top photo from former USIA design director Jack Masey’s powerpoint deck on the history of postwar World’s Fairs, which he presented last October at the National Building Museum. I’m about to listen to his archived talk now.]