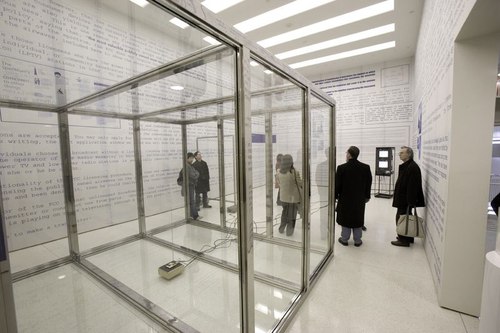 A piece I left out of my Rirkrit’s blingy objects post yesterday may be more important than I originally thought, and for more reasons than its shininess.
Untitled 2005 (the air between the chain-link fence and the broken bicycle wheel) was the Guggenheim installation Rirkrit got to do for winning the Hugo Boss prize. It was a low-power, unlicensed TV transmitter, the blueprints for building your own, and wallpaper full of texts about freedom of speech, the revolutionary power of media, and the political and economic contradictions of the FCC.
I was thinking of mentioning it because it atypically included structures made of both plywood and of mirror-finished steel. The glass and steel vitrine held the TV transmitter, the source of media power, while the similarly sized plywood shed contained the antenna and a TV. The steel cube was closed off; the ply cube had a door, windows, and 2×4 furniture. Oh, and an antenna made in the form of Marcel Duchamp’s bicycle wheel. 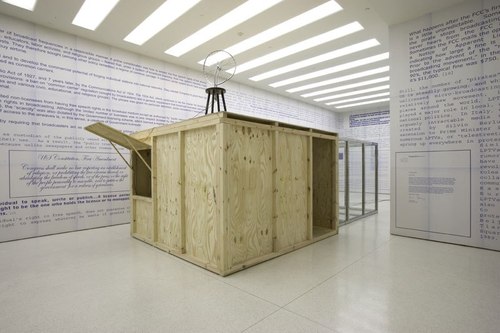 The instructions for making your own TV station were printed on posters, made available on the floor in a Felix-style stack. If there were a more explicit evocation possible of contemporary art and the political clashes of the 60s, 70s, 80s, and 90s, I guess I can’t think of what it was. Except maybe for Rirkrit’s collaboration the next year with Mark di Suvero to create an Iraq War-era version The Peace Tower. 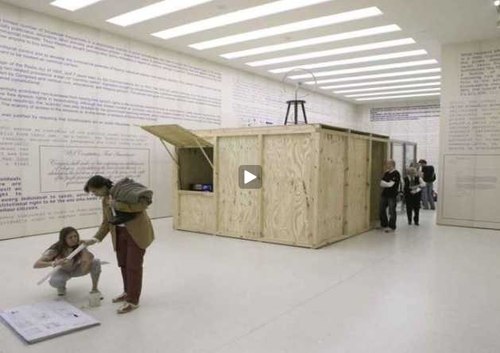 Untitled 2005 (the air between the chain-link fence and the broken bicycle wheel), detail, via
And then I found Holland Cotter’s unexpectedly extraordinary-in-parts review of Rirkrit’s 2005 Guggenheim show:

The installation is basically a bare-bones statement of the practical fact that anyone who wants to participate in shaping the communications media that are shaping the world at large can do so. “Everyone is an artist” was Joseph Beuys’s potent rallying cry in the 1960’s and 70’s, which made artists and “the people” one. Mr. Tiravanija, who has learned much from Beuys, adds his own variation: “Everyone is a broadcaster. Make this transmitter at home.” 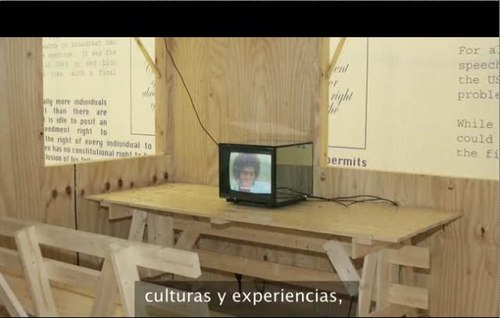 Hmm, mirrored TV: Untitled 2005 (the air between the chain-link fence and the broken bicycle wheel), detail, via
At the same time, he has customized his own version with a couple of features that are not necessarily meant for replication. One is the glass box encasing the transmitter. Its presence is symbolic, a reminder of how resources that should be available free to everyone become the closely guarded valuables of a privileged few.

Yow, that suddenly puts a polemical shine on Rirkrit’s deployment of chrome; makes me not want to get caught with a shiny ping-pong table when The Revolution comes.
But then, in one sense, it’s already here.
The complicated connection between politically charged art of the 00s and today’s Occupy Wall Street protests grew starker as I read Martha Schwendener’s sharp piece in the Voice [thanks, Tyler] about the implications of #OWS for art, and vice versa:

Art was, for a long time, a utopian model. But with bohemianism eroded by gentrification and the 1 percent end of the art spectrum devoted primarily to vapid, overfunded gestures, you wonder if a recent Columbia University symposium, which described art as “a catalyst and platform heralding justice, solidarity, and a peaceful future” is nostalgia–or just wishful thinking.

Schwendener’s piece read to me like a wakeup call for artists: “Practice [sic] is over. This is not a drill.”
Which made me think right back to Cotter’s opening, clear-eyed for a child of the 60s, a reflection on the very idea of “Power to the people”:

Who were “the people,” anyway? Blue-collar workers, African-Americans in the civil rights movement, immigrant laborers. Students? Some, though even engaged young people tended to want to help the people rather than be the people.

There’s a Rirkrit t-shirt in there somewhere, I can just feel it.
Art Review | Rirkrit Tiravanija: Work Whose Medium Is Indeed Its Message [nyt]
What does Occupy Wall Street mean for art? [villagevoice]