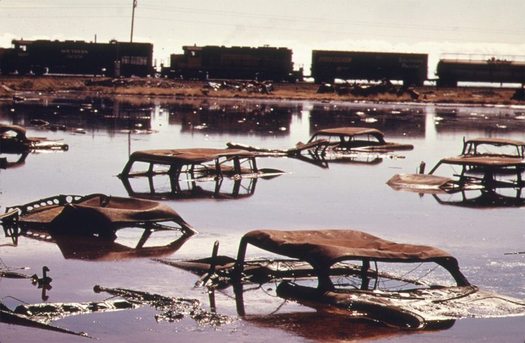 One of the startling images Alan Taylor included from the EPA’s DOCUMERICA collection is by Bruce McAllister. The caption:

A train on the Southern Pacific Railroad passes a five-acre pond, which was used as a dump site by area commercial firms, near Ogden, Utah, in April of 1974. The acid water, oil, acid clay sludge, dead animals, junked cars and other dump debris were cleaned up by several governmental groups under the supervision of the EPA. Some 1,200,000 gallons of liquid were pumped from the site, neutralized and taken to a disposal site.

Hmm, is that the only photo McAllister took of railroads and toxic industrial dumps near Ogden in the early 1970s?
No. 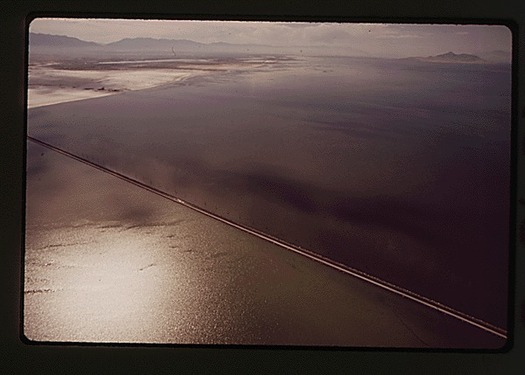 “THE UNION PACIFIC RAILROAD’S CAUSEWAY ACROSS THE GREAT SALT LAKE THREATENS THE ECOLOGICAL BALANCE OF THE LAKE, 07/1972”
McAllister’s acid pond is “near Ogden,” but it turns out it was even nearer the Great Salt Lake. The site was called Little Mountain Salvage. 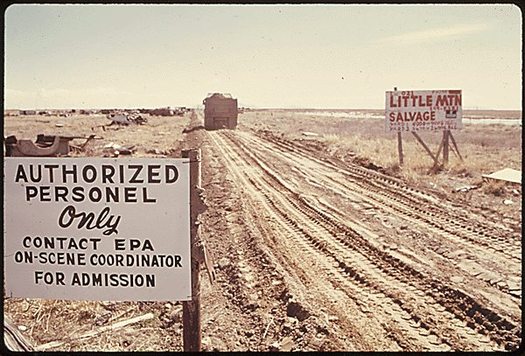 “EPA PERSONNEL SUPERVISED THE CLEANUP OF A FIVE ACRE POND FILLED WITH ACID WATER, OIL, ACID CLAY SLUDGE, DEAD ANIMALS, JUNKED CARS AND OTHER DUMP DEBRIS. IT PREVENTED POSSIBLE CONTAMINATION OF A NEARBY WILDLIFE REFUGE AND GREAT SALT LAKE. THE APPROACH ROAD SHOWN WAS USED TO TRUCK OUT SOME 1,200,000 GALLONS OF LIQUID WHICH WAS NEUTRALIZED AND TAKEN TO A DISPOSAL SITE, 04/1974”
You can still see it on the eastern shore of the lake, on the north side of where the track hits the causeway. 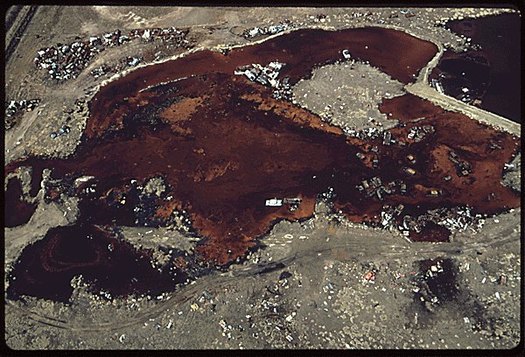 “CLOSEUP AERIAL VIEW OF A FIVE ACRE POND THAT CONTAINED ACID WATER, OIL, ACID CLAY SLUDGE, CARS, DEAD ANIMALS AND DUMPED DEBRIS BEFORE IT WAS CLEANED UP UNDER EPA SUPERVISION. THE PRIVATELY OWNED LAND WAS LEASED TO COMMERCIAL FIRMS WHICH USED IT AS A DUMP SITE, 04/1974”
This looks horrific, but also small. How common were toxic hotspots like Little Mountain Salvage? I don’t know. But wow. Hmm, in the mean time, that aerial view looks like more than a few early Michael Ashkin sculptures. 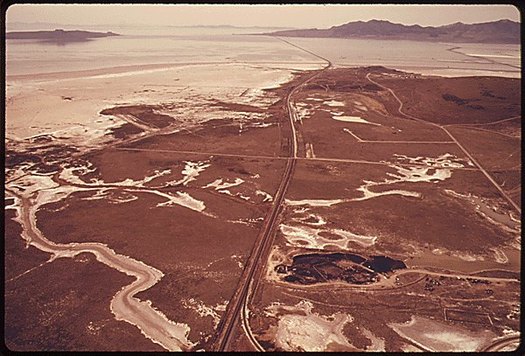 “AERIAL VIEW OF THE POND WHEN CLEANUP OPERATIONS WERE HALF FINISHED. IN THE BACKGROUND BEYOND THE POND IS THE DISPOSAL SITE FOR THE LIQUID WHICH WAS TREATED AND NEUTRALIZED. IN THE UPPER LEFT PORTION OF THE PICTURE ARE EVAPORATION CELLS ON THE EDGE OF GREAT SALT LAKE. ” 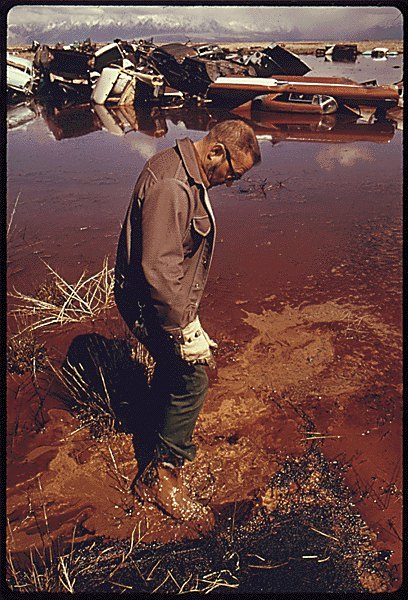 “ONE OF THE WORKERS INVOLVED IN THE CLEANUP OF A FIVE ACRE POND FILLED WITH ACID WATER, OIL, ACID CLAY SLUDGE, DEAD ANIMALS JUNKED CARS AND OTHER DEBRIS CHECKS THE CONSISTENCY OF THE MUCK ”
These captions start sounding like a fugue, repeating the pollution checklist, each adding a new datapoint. 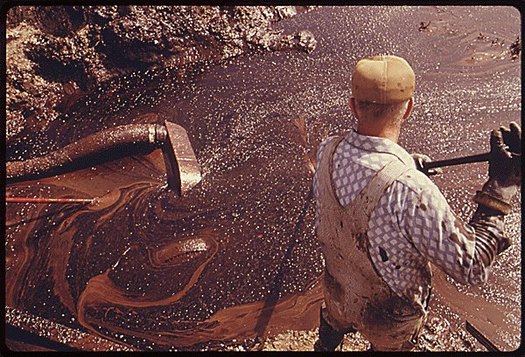 “PUMPING OPERATION UNDERWAY WHICH REMOVED SOME 1,200,000 GALLONS OF ACID WATER AND OIL FROM THE FIVE ACRE POND. THE LIQUID WAS NEUTRALIZED AFTER REMOVAL AND TRUCKED TO A NEARBY SITE FOR DISPOSAL.” 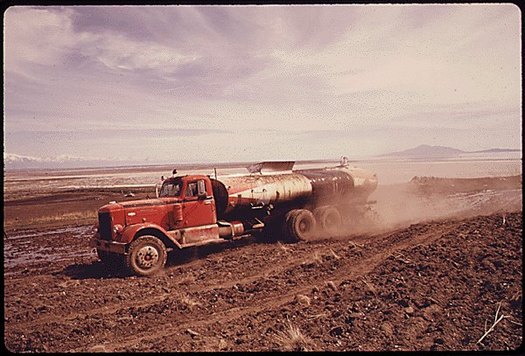 “TANK TRUCK IS SHOWN SPREADING SLUDGE AT A DISPOSAL SITE NEAR THE FIVE ACRE POND. SOME 1,200,000 GALLONS OF LIQUID WAS TREATED AND THEN SPREAD ONTO THE SITE. A TRACTOR PULLED DISC MIXED IT WITH EARTH UNDER SUPERVISION OF EPA PERSONNEL. THE SITE WILL BE MONITORED BY UTAH STATE UNIVERSITY UNDER AN AGREEMENT WITH EPA, 04/1974” 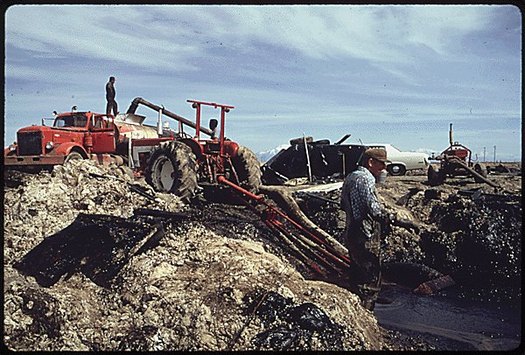 “PUMPING OPERATION UNDERWAY WHICH REMOVED SOME 1,200,000 GALLONS OF ACID WATER AND OIL FROM THE FIVE ACRE POND. THE LIQUID WAS NEUTRALIZED AFTER REMOVAL AND TRUCKED TO A NEARBY SITE FOR DISPOSAL. THE POND WAS CLEANED UP UNDER EPA SUPERVISION TO PREVENT POSSIBLE CONTAMINATION OF NEARBY GREAT SALT LAKE AND A WILDLIFE REFUGE, 04/1974”
So at which point did these Bruce McAllister photos of an EPA toxic waste cleanup at the Great Salt Lake start looking like stills from Robert Smithson’s Spiral Jetty to you? [Or in the case of that last one, Asphalt Rundown?] 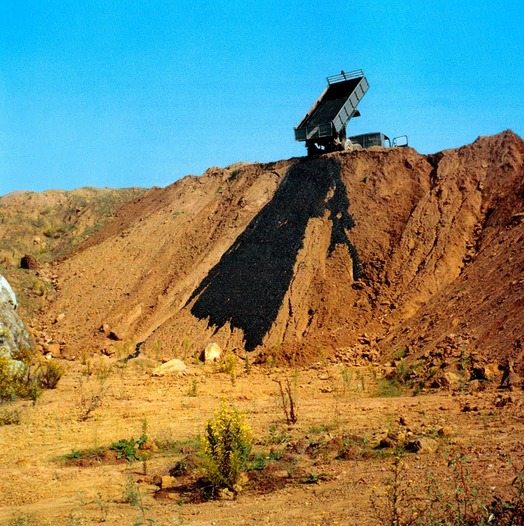 It may get a nod in historical discussion, and something like Monuments of Passaic does have a pretty rough feel to it, but the aestheticization of the work means I almost never consider the heavily polluted context Smithson was working in. This was Smithson’s landscape.
DOCUMERICA and the Little Mountain Salvage cleanup were going on at exactly the same time Smithson was constructing Spiral Jetty–and filming its construction. The causeway changed the chemistry of the northern half of the lake, resulting in the pinkish water that drew Smithson to Rozel Point. It’s almost like McAllister and the EPA were producing a companion piece to Spiral Jetty right next door. One movie was about contemplating the land in the geologic past, and the other was about acting in the urgent here and now.