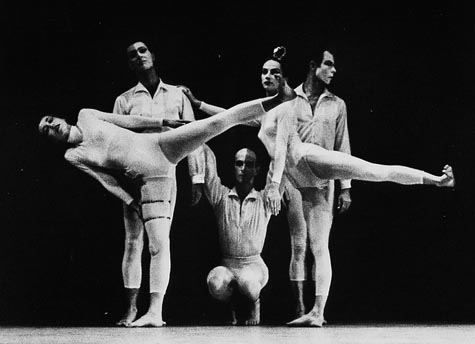 [l to r] Viola Farber, Bruce King, Remy Charlip, Carolyn Brown & Merce Cunningham performing Nocturnes in 1956. photo CDF/Louis A. Stevenson, Jr. via the estate project
Remy Charlip was an early collaborator in Merce Cunningham’s orbit. Years before he began his second or third acclaimed career as a children’s book illustrator and author, Charlip danced with Cunningham and Martha Graham in New York and at Black Mountain College. He created the programs for the August 1952 Cage et al performance at BMC which is considered the first “Happening.” They were printed on cigarette paper, and were placed at the entrance next to a bowl of tobacco, with an ashtray on each seat. 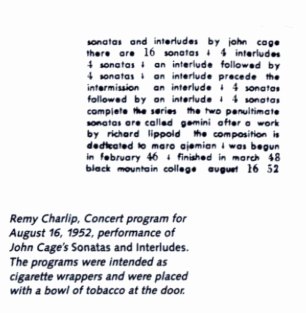 image of what has to be a Charlip program for a different Cage performance, via The Arts at Black Mountain College
Though he’s a bit off on the dates, what with Cage only buying the VW bus in 1959, John Held’s Charlip biography lays out the basic configuration of the bus:

As if BMC was not enough, Charlip received continuing post-graduate work from 1956-1961 in the back of a Volkswagen Microbus driven by John Cage, navigated by Merce Cunningham, enlivened by Robert Rauschenberg, with traveling companions Nicholas Cernovich and dancers Carolyn Brown, Viola Farber, Steve Paxton and others. 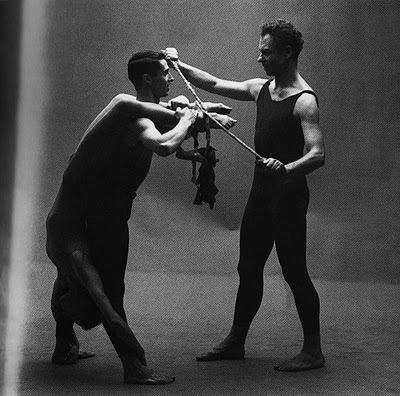 [l to r] Carolyn Brown, Steve Paxton & Merce Cunningham, 1961, image via cepress
A couple of weeks ago, Paxton talked to the Washington Post about the bus: Later that year [1960? ’61? -ed.] Remy resigned, and I was invited into the smaller company. This meant touring around the U.S. in a Volkswagen bus, which, I was informed, it was my duty to pack. And unpack. And distribute and later collect all the items packed. There were the spaces under the seats, a compartment in the back, and a roof rack to transport nine persons’ personal luggage, the equipment of John Cage and David Tudor for various musical adventures, and the sets and costumes for the tour. The bus was heavy laden, and it never let us down, including at least two tours the the West Coast.
John or Merce drove, and John liked to play Scrabble when off-duty. The rest of us conversed and Viola [Farber] knitted. It was rather like a family around the hearth. Long silence, naps, breaks to stretch and walk about, and usually some amazing treat produced by John, a huge salad perhaps, or once Rogue River pears at perfect ripeness with pear liquor to accompany. David was quiet, Marilyn Wood chatty, Carolyn [Brown] and Viola made comment, Merce sometimes spoke, John and Bob laughed a lot, and both were great story-tellers. I remember the actual driving fondly. 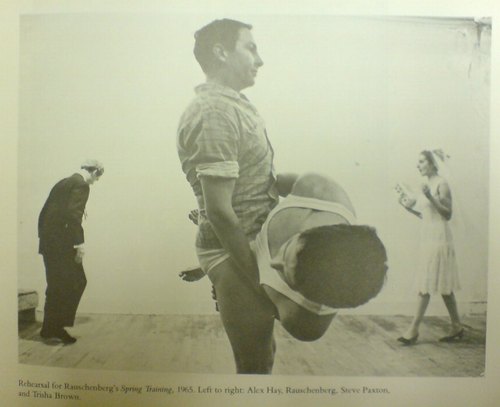