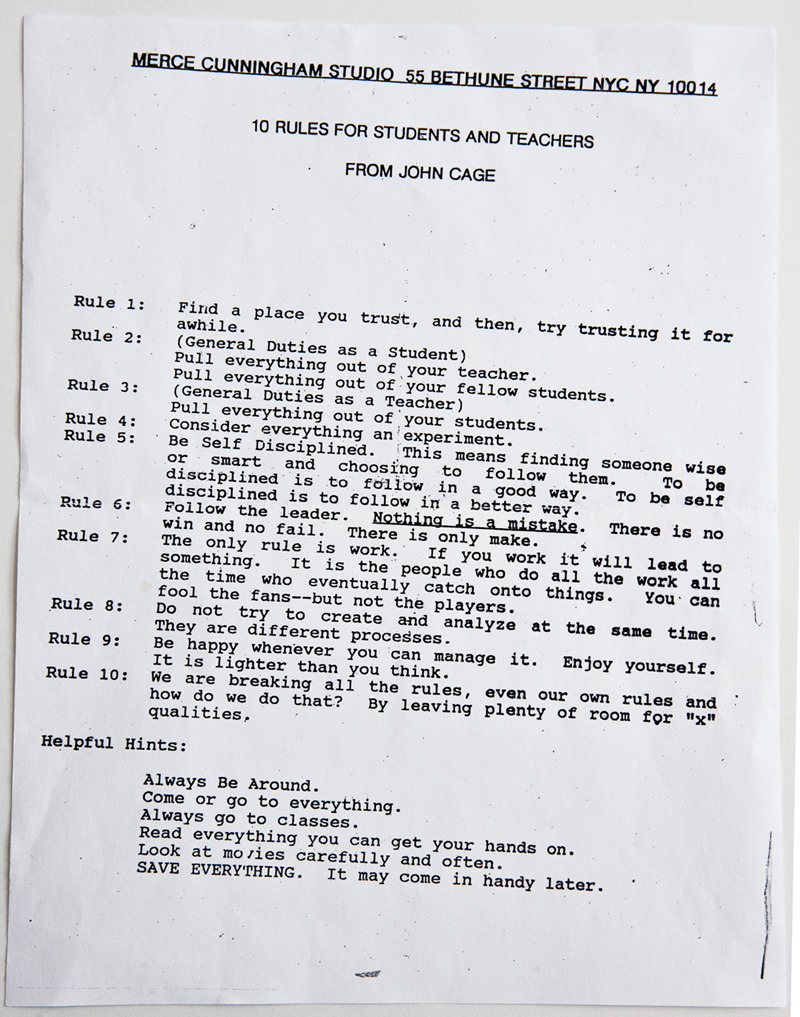 Usually the Internet solves mysteries by yielding definitive information. Sometimes it makes it worse, though, and more confusing. Tumblr, I’m lookin’ at you.
Artist/artist book hero Dave Dyment emailed the other day, wondering what I thought about the source of 10 Rules For Students And Teachers From John Cage, which was famously on the wall at Merce Cunningham’s studio for years, and which has been circulating online in various photocopied and scanned forms.
Except for Rule 10, which is a quote from Cage’s book SILENCE, Dave didn’t think it really sounded like Cage, and I certainly agree. And he’d never been able to find the other texts in Cage’s published works. So who might have written it, if not Cage? And if he didn’t write it, how did it get attributed to Cage, while it was hanging on the wall of Cage’s longtime partner’s studio?
In 2012, Brain Picking had said that despite what everyone thought about Cage, 10 Rules’ actual author was everyone’s favorite serigraphicist nun, Sister Corita Kent.
Which was funny, because in 2010, blogger Keri Smith wrote about 10 Rules because she’d heard exactly the opposite: that despite what everyone had heard about Sister Corita, those rules were actually written by John Cage. And one source of that information was none other than Laura Kuhn, of the John Cage Trust.
Smith’s post attracted some seriously high quality comments in 2010-12, including students of students of Sister Corita who remembered the Rules; and scholars of dancers who remembered the flyers. Then in June 2012, Jill Bell quoted “Richard Crawford who was in on the creation of ‘The Rules’.” Crawford was a student of Sister Corita’s in 1967-68, and says she gave the class the assignment to come up with a list of rules one night, and then to design and print them up. Cage’s quote was contributed by one of the students.
Which, even if it’s definitive, still doesn’t explain how they got to Cage, and to Merce with Cage’s name. The Rules circulated among Kent’s students and school. They were included in the 1986 edition of the Whole Earth Catalog, with Cage’s name in parentheses following Rule 10. Whether Kent sent the Rules to Cage before this, or after, or Cage found them and posted them, or a Merce dancer found them, they were connected to Cage and had a resonant presence in Cunningham’s and Cage’s community. If the last two years have uncovered any additional history from the MCDC side, I haven’t seen it, but I’d love to.
2012: 10 Rules for Students, Teachers, and Life by John Cage and Sister Corita Kent [brainpickings.org]
2010: You Know I Love A Good Mystery [kerismith]