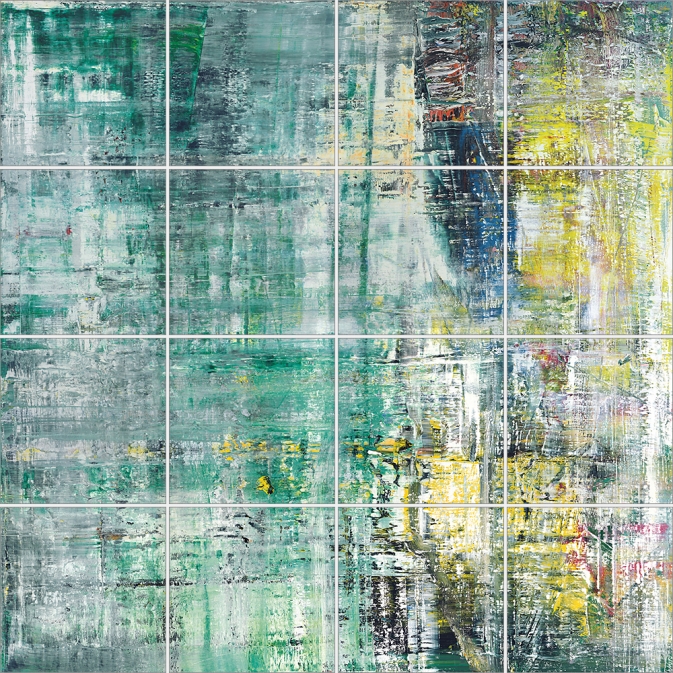 I was kind of baffled when I saw this Richter in Christie’s February sale in London, and I’ve had it on my desktop ever since. It’s called Cage Grid I, and it’s a 16-panel giclée print [!!, oh how I hate that word] mounted on aluminum that reproduces the 2006 squeegee painting, Cage 6, basically at 1:1 scale.
In fact, if you include the small gaps between the 75cm square panels, the giclée version is slightly larger than the 3×3-meter painting. It pulls the painting apart instead of occluding it with a grid overlay. Though there are digital prints and inkjet prints in the artist’s CR, Cage Grid is the only edition listed as a giclée. There are both complete editions Cage Grid I and 16 individual quadrants, Parts A-P, Cage Grid II.
Richter has chopped up his paintings before, turning full-size squeegee paintings into a series of tiny squeegee fragments. He’s made giant gridded photo panels before, like Strontium (2004), at the deYoung Museum. He’s got reconfigurable grid paintings [mounted on Aludibond, btw], like 4900 Colours.
He’s made photos of Strip paintings, which are actually manipulated photos of fragments of another squeegee painting, digitally printed, and mounted on aluminum and sometimes under plexi.
And he’s made photo versions of paintings before. These 1998 Orchid offset prints are done at full-scale of the 1997 painting, but cropped in five different ways. Herr Heyde is a little 2001 offset print on Aludibond that’s the same size as the little 1965 painting. [Richter favored offset prints, then a few c-prints, before going digital, except for Ice 2, a 2003 half-scale reproduction of a 1989 squeegee painting that’s actually a 41-color screenprint.] There’s 1:1 Uncle Rudi (2000), and the 1996 photo edition of the painting of the photo of his wife, which I thought would make a good Richard Prince nurse painting. Seven Two Four (2005) are 1:1-scale blurred photos of a 1990 squeegee painting. [A painting for which Richter has atypically posted 21 detail photos.] 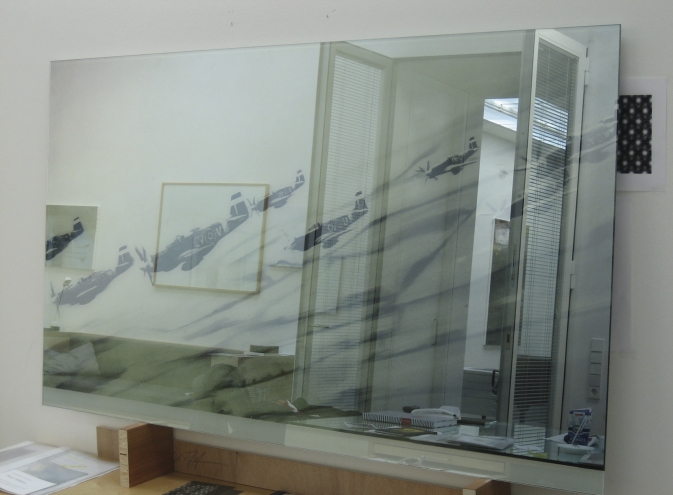 Wow, when you shoot it that way, the 1:1 photo edition of Mustang Squadron (2005) looks amazing, and not at all like a bridge line version of the couture original. Speaking of which, back in 1998 Richter made a 1:1 photo edition of 48 Portraits, his landmark blurred painting grid from the 1972 Venice Bienale. 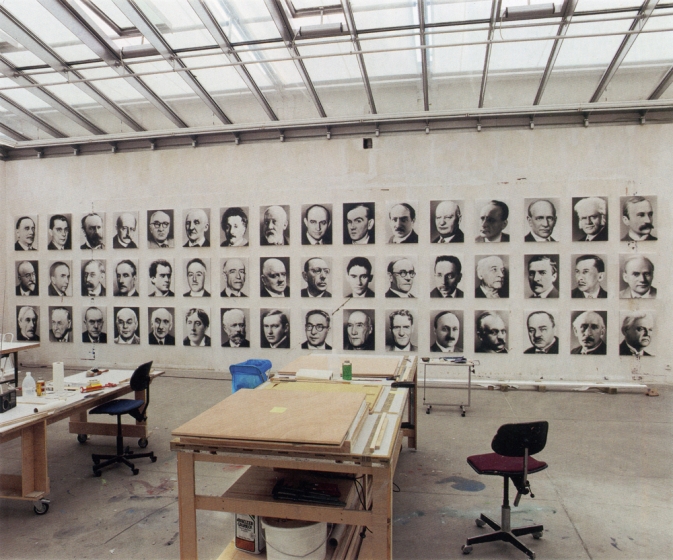 And this is one thing that nags at me about Cage Grid: even if I buy the arguments about photo vs. painting, experimentation, or materialist variation, I feel like what’s actually being sold is iconic sameness. It’s not so much the Capitalist Realism that–actually, yes, it’s the capitalist reality that gets me, but not the supply, the demand. I feel less undone by the artist churning out a towering Kinkadian pyramid of merch than by the critico-consumer desert criss-crossed by collectors, institutions and speculators that swallows it up.
It’s not that Richter makes readily monetizable editions of iconic works he loans to museums. [The Cage series is at Tate. Modern. The Cage Grid prints were actually sold by Tate Modern, during the 2011 Panorama retrospective.] It’s that despite my ambivalence, I want some. [Oh, look, that Mustang Squadron that sold at Phillips in 2006 is up for sale at Sotheby’s.]
14 Feb. 2014, Lot 120: Gerhard Richter, Cage Grid I (Complete Set), 2011, 15/16, plus 4ap, sold for £566,500 [christies.com]
15 May 2014, Lot 243: Gerhard Richter, MUSTANG-STAFFEL (MUSTANG SQUADRON), ed. 39/48, 1 AP, est. $250,000-350,000 [sothebys]
Previously, uneasily related, partly because I only just now remembered I had similar qualms about a similar situation last year: Gerhard Richter’s Septembers