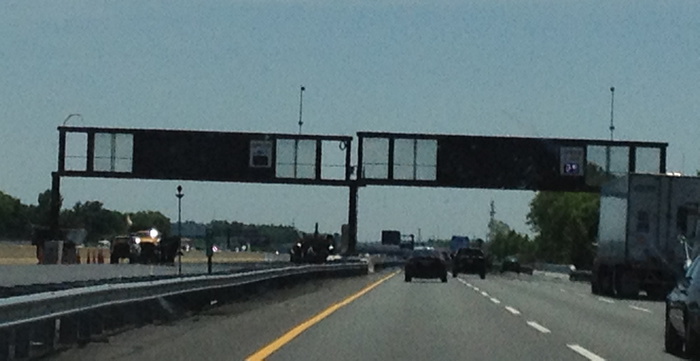 Can I just say how much I like the new aesthetic of the New Jersey Turnpike expansion project? I honestly cannot imagine that many people going to or from the Pennsylvania Turnpike; at least in my 10 years of DC-NYC shuttling, I’ve never seen that kind of volume, but aesthetically, I’m generally for it.
It’s not the only place that has it, and maybe it’s just the standard now in overpass and on- and off-ramp construction, but instead of bulky concrete pillars, the ramps are held up by huge, road-spanning I-beams. They all have a beautiful, oxidizing protective finish, too, like the best Richard Serras. 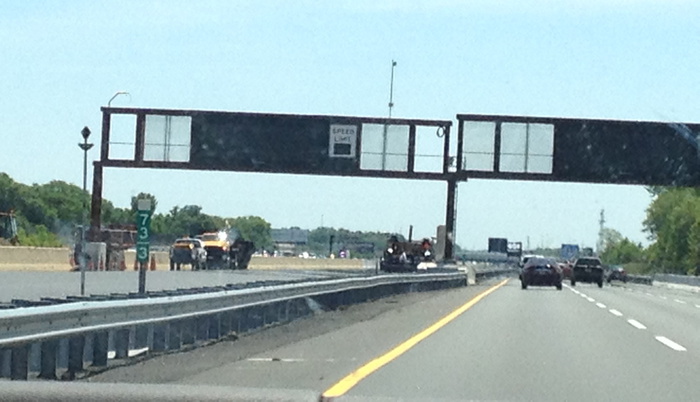 Even cooler, though, are the new electronic signs, which are constructed of square, Cor-Ten pipe, and they have meshed-in spaces for maintenance. Not just catwalks, or ledges, but actual spaces. What we perceive as a flat thing–a sign–turns out to be a space. Like the window halllways at Grand Central or Philadelphia 30th Street Stations. The Turnpike signs are New Jersey’s newest architectural icons, suspended across that state’s iconic landscape: a 12-lane highway.
And someone designs this stuff. Probably someone at PKF Mark III, the firm which the Turnpike Authority awarded three contracts in 2011, totaling over $44 million, for the “Installation of Variable Message Signs at New and Existing Locations on the Turnpike.” 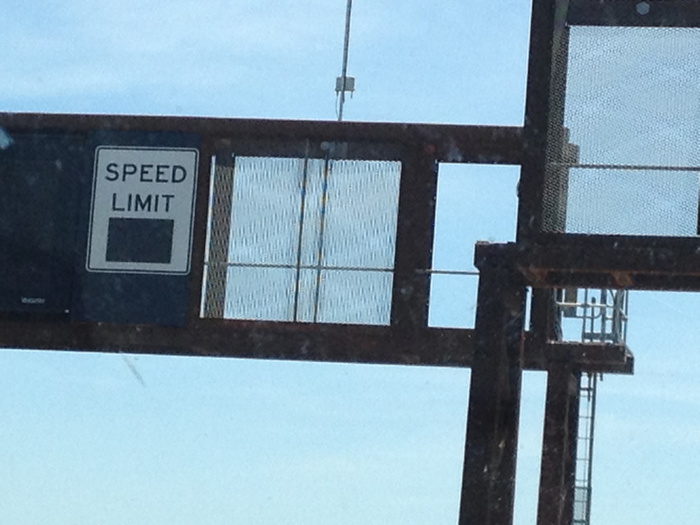 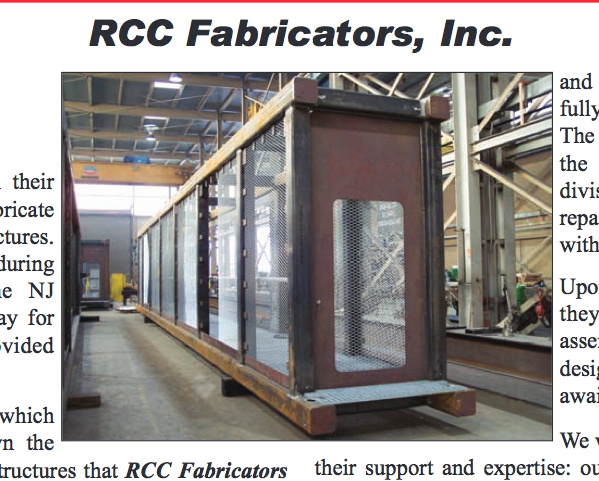 The project was one of the highlights in the 2011 newsletter for the Railroad Construction Company, Inc. family of companies [pdf, img above]. RCC Fabrication made 61 VSM sign structures, 41 for the Turnpike and 20 for the Garden State Parkway. The structures span up to 95 feet, and were built entirely off-site. I can’t tell from the acknowledgements who is actually responsible for this form, but it works.
The architect/sculptor Tony Smith famously described the revelatory experience of driving down the unfinished New Jersey Turnpike in 1951 [pdf]. Me, I would like to move in before it opens. And before it gets too hot.
Previously: Michael Ashkin, “For Months He Lived Between The Billboards”, 1993
Related infrastructure as domestic architecture: That Minnesota Skyway for sale again/still
Mies Gas Station