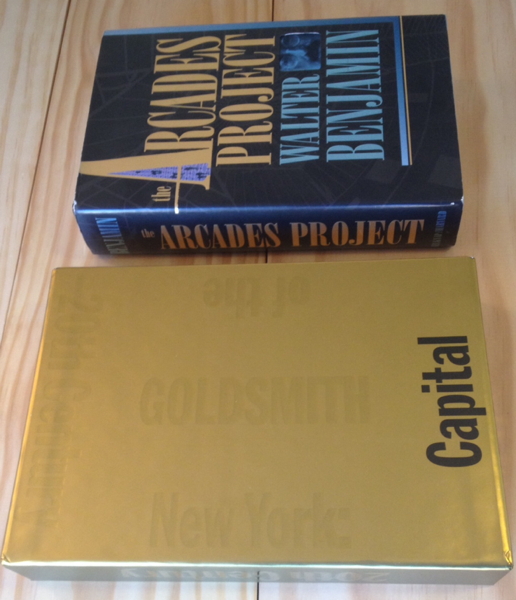 I was going to post an actual review of Kenneth Goldsmith’s new book, Capital, then the attacks in Paris happened. And then I thought I would write about Benjamin’s The Arcades Project, which served as inspiration for Goldsmith’s compendium. But I found the texts about Paris that fascinated Benjamin to be completely unhelpful for the situation I was in. I lived and worked between New York and Paris for several years until 2000. I embraced the 1999 edition of The Arcades Project as a map into my adopted city. And now that map felt out of date.
This is all too much information, though, for what I have decided to do, since no one really needs my warm take on a book that is, by design, nearly unreviewable, about a city, New York, that is equally impervious to encapsulation.
So here is a mashup of Capital and The Arcades Project, excerpting texts from whatever page I turn to, in turn. Benjamin first, p. 306:

WB: Baudelaire
Baudelaire’s fatalism: “At the time of the coup d’état in December, he felt a sense of outrage. ‘What a disgrace!’ he cried at first; then he came to see things ‘from a providential perspective’ and resigned himself like a monk.” Desjardins, “Charles Baudelaire,” Revue bleue (1887), p. 19.
Baudelaire-according to Desjardins-unites the sensibility of the Marquis de Sade with the doctrines of Jansenius.
…
KG: Food-Chinese
Americans looked on with wonder and asked him what the name of the food was that his chef was preparing. His answer was “Chop Suey” which meant that it was a combination of mixed foods. He explained that it was a meal consisting of bean sprouts, celery and Chinese greens, plus amy more vegetables, with a touch of meat, usually pork. The guests begged him to let them taste it. They did. Immediately they clamored for more. Overnight, Chop Suey won widespread popularity.
Chinese residents in New York soon found a new field of endeavor open to them. They opened restaurants and called them “Chop Suey Houses.” Many of these original Chop Suey Houses still exist.

KG: Robert Moses-Culture
Planners, in general, he said, are “socialists” and “revolutionaries.” [Caro, p.471]
Moses: “I am in the position of an artist or a sculptor…I can see New York as it should be and as it can be…But now I am like the man who has a conception that he wishes to carve or to paint, who has the model before him, but hasn’t a chisel or a brush.” In certain respects, Robert Moses became La Guardia’s “chisel.” [Peretti, p.153]
…
WB: Saint-Simon, Railroads
Girardin’s style: “Indentation with each new sentence, each sentence being but a line; the antithesis of ideas enveloped in the similitude of word; rhyme in prose…; all nouns capitalized, enumerations that recall Rabelais, definitions that often recall nothing at all.” Edouard Drumont, Les Héros et les pitres (Paris 1900), p. 131.

WB: Arcades, Magasins de Nouveautés, Sales Clerks
“Martin: Business, you see, sir…is the ruler of the world! –Desgenais: I am of your opinion Monsieur Martin, but the ruler alone is not enough; there must be subjects. And that is where painting, sculpture, music come in… –Martin: A little of that is necessary, surely,…and…I myself have encouraged the arts. Why, in my last establishment, the Café de France, I had many paintings on allegorical subjects…What is more, I engaged musicians for the evenings…Finally, if I may invite you to accompany me…you will see under my peristyle two very large, scantily attired statues, each with a light fixture on its head. –Desgenais: A light fixture? –Martin: That is my idea of sculpture: it must serve some purpose…All those statues with an art or a leg in the air-what are they good for, since they have no pipe installed to carry gas?…What are they good for?” Théodore Barrière, Les Parisiens, produced at the Théâtre du Vaudeville on December 28, 1854 (Paris, 1855), p. 20 [The play is set in 1839.]
…
KG: Nature – Fauna
O’BRIEN: Some of them are smart, some of them learn to jump at the right time.
BURROUGHS: Some of them have wings.
BOCKRIS: You stated flatly that all waterbugs had wings.
BURROUGHS: As far as I know, although they may undergo various cycles.
O’BRIEN: They eat plastic.
BURROUGHS: Yes. They eat glue, they eat the bindings out of your books.
BOCKRIS: We’re closer to roaches than almost anything else in New York and we don’t know anything about them, their habits.
BURROUGHS: I think you’re a bleeding heart do-gooder; you think we should get to know more about roaches. I doubt it, frankly.

KG: Death-Cosmic
On some winter afternoon, cross to the New Jersey Shore and between five and six take the Cortlandt Street Ferry back to Manhattan. At that hour and season it is already dark, but the offices are not yet closed; every window blazes with electric lights from which the mists have filtered out of the garishness. The distinction between buildings has disappeared now; only the sky-line wavers faintly against the glare beyond. The rest is just windows-by thousand and thousands. It all seems one enormous structure, a palace beyond human imagination for splendor and height and extent. A primitive man, magicked onto the Cortlandt Street Ferry at this hour, would fall on his knees, believing that he saw the Heavenly City. [Irwin, p. 20]
…
WB: First Sketches
The deepest enchantment of the collector: to put things under a spell, as though at a touch of the magic wand, so that all at once, while a last shudder runs over them, they are transfixed. All architecture becomes pedestal, socle, frame, antique memory room. It must not be assumed that the collector, the flâneur, would find anything strange in the topos hyperouranios-that place beyond the heavens where Plato locates the immutable archetypes of things. He loses himself, assuredly. But in return, he has the strength to raise himself up again to his full height-thanks to a project . From out of the mists that envelop his sun, images arise like the tables of the cods, islands in the Mediterranean. [See H1a,2.]
The need for sensation as king-size vice. To fasten on two of the seven deadly sins. Which ones?? The prophecy that men would be blinded by the effects of too much electric light, and maddened by the rapidity of news reporting. [See B2,1.]

WB: First Sketches
……………
Surrealism-“wave of dreams”-new art of flânerie. New nineteenth-century past-Paris its classic locale. Here, fashion has opened the place of dialectical exchange between woman and ware. The clear, death, tall and loutish, measures the century by the yard, serves as mannequin himself to save costs, and manages single-handedly the “liquidation” that in French is called “revolution.” [See f*, 1 and B1, 4] And all this we know only since yesterday. We look on the empty offices, and where [?] yesterday there was [?]…a room. [D*,1]
…
KG: Air-Spring
As I watched Frank and Larry heading toward Broadway and Tenth Street, with Frank resolutely leading the way, I suddenly became aware of the weather. It was especially beautiful, almost balmy, and since it was still the shank of the evening and I felt horny-nice weather always had that effect on me when I was younger-I saw no reason why I shouldn’t go cruising. [LeSueuer, p.298]
Walking uptown in the mauve eight o’clocks of early summer evenings and looking at things, Lowestoft tureens in Fifty-Seventh Street windows, people in evening clothes trying to get taxis, the trees just coming into full leaf, the lambent air,all the sweet promises of money and summer. [Didion, “Goodbye,” p.174]
And so this year there was no spring. One moment it was chilly and then over night the limp, humid heat of summer sank into the city. [Blandford, p.28]

OK, Arcades Project going deep like that, I think we understand why Capital wants to follow it home.
Buy Capital: New York, Capital of the 20th Century Amazon of directly from VersoBooks. [amazon, versobooks]
Buy Benjamin’s The Arcades Project, translated into English by Eiland & McLaughlin [amazon]