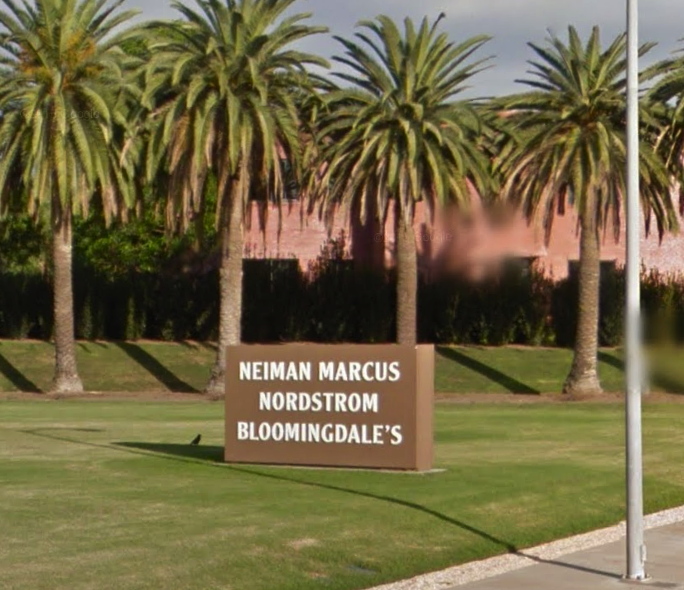 Untitled (Newport Center Monument) IV, 2017, 72 or 84-in. x 108 or 156 in. by 12 in., Ruddy Oak and Bright White on panels, installation image: gmaps
In 2011 The Irvine Company installed two identical monument signs in the grassy quarter-rounds on the East Coast Highway entrance of Fashion Island and Newport Center. They feature the names of three major tenants each, on both sides. Seven feet tall and 13 feet wide, they exceed the maximum dimensions (6′ x 9′) permitted under the Sign Standards of the Newport Beach Zoning Code, and required a variance. [In person the other day, I would never have guessed they were 7×13; they definitely feel like 6×9. Is it possible they were reduced in size after the permit was granted?] 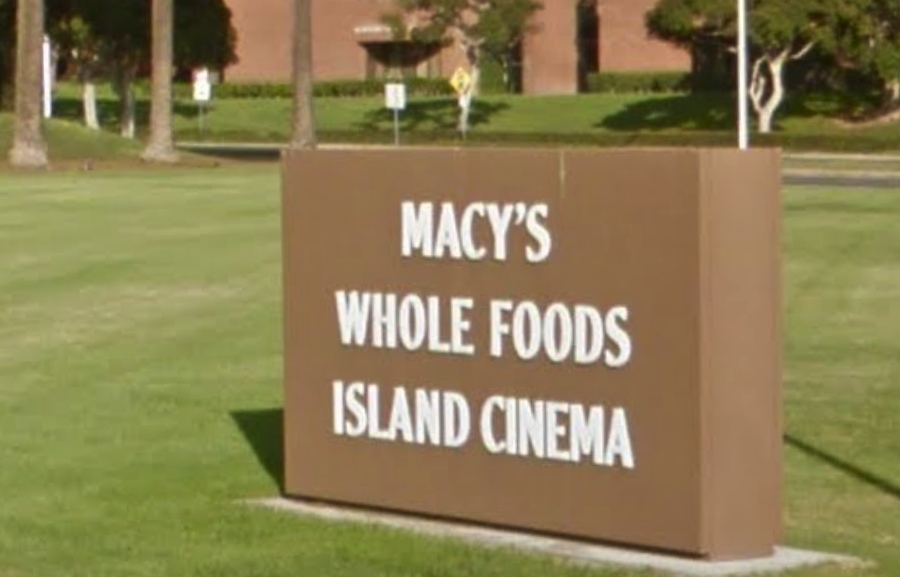 Untitled (Newport Center Monument) III, 2017, 72 or 84-in. x 108 or 156 in. by 12 in., Ruddy Oak and Bright White on panels, installation image: gmaps
Though they also exceed the Code’s letter size limits, the signs comply with the requirement that letters be “individually fabricated” and of high contrast for easy legibility. At least at their genesis, they were specified to be finished with Reflective Coating #1460 Bright White from Axon Aerospace, Inc.

No aesthetic delectation here, Ruddy Oak! hashtag Spanish-Mediterranean, hashtag Craftsman, hashtag Perfect Palette®, image: dunnedwards.com
The 2011 permit application [pdf] describes the new signs as having “a faux plaster finish,” but they sure looked painted to me. They match the color specified on plans [pdf] for a similar sign for an adjacent Irvine Company office building: a reddish brown from a local manufacturer, Dunn-Edwards Ruddy Oak (DE5188).
I can find no public record of this color being specified or required in either Newport Beach or Irvine Company codes or styleguides, but it is in heavy use for shopping center and commercial signs within the boundaries of The Irvine Ranch. It also appears on the permitted color lists of at least eight homeowners associations (HOA) in coastal Southern California. 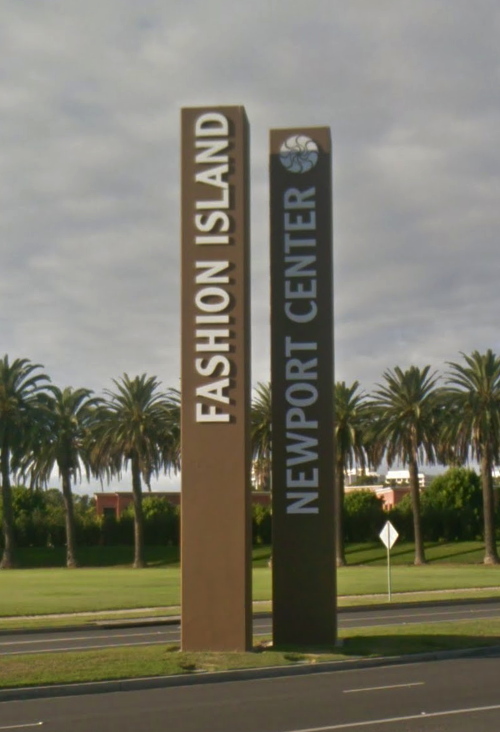 Untitled (Newport Center Monument) I, II, 2017, 43 x 4 ft each, Ruddy Oak and Bright White on substrate, installation image: gmaps
They also match the color and finish of the main signs at the East Coast Highway entrance, a pair of 43-foot-tall pylons installed in 1985. Which is also the first year The Irvine Company used the “sunwave” logo. Over time the text on the signs has changed to reflect the evolving brand distinctions between Newport Center, a massive, multi-use development, and Fashion Island, the vast mall at its center.
For their part, the Newport Center signs also exceed the 20′ height limit for pylon signs by 115%, but I presume they predated the creation of the code, and/or that no one will tell The Irvine Company what it can’t do in Newport Beach. Their letters are individually fabricated.
There are at least eleven other signs at other entrances to Fashion Island/Newport Center, but they’re more architectural than sculptural, with concrete plinths and stucco-finished capitals. Only the four signs on the ECH exhibit this rigorous, minimalist aspect. 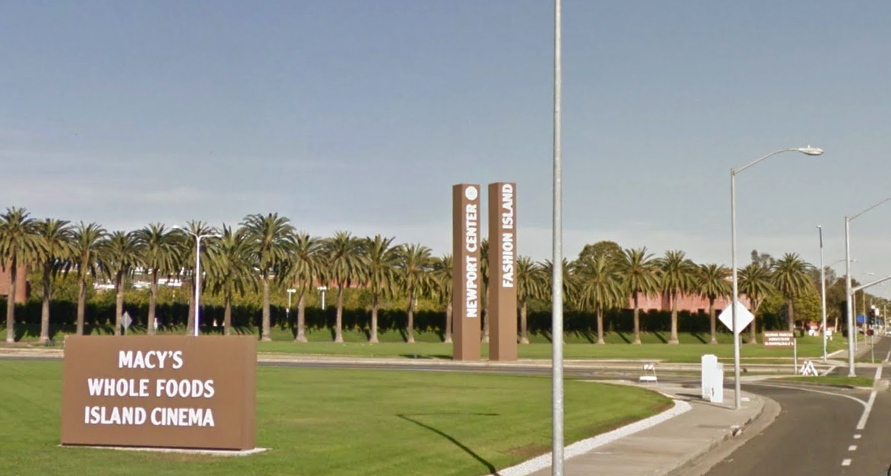 [l. to r.] Untitled (Newport Center Monument) III, I, II & IV, 2017, installation view, image: gmaps
Fashion Island was and remains a leader in the mall industry for experiential design. In an essay called, “The Archaeology of ‘Shoppertainment,'” Matthew Cochran and Paul Mullins wrote about RTKL/ ID8, a mall interior design company which worked on the Fashion Island Experience. They quote an RTKL brochure:

[Mall experience is] about storytelling. Great places tell stories, and people love to find themselves in those stories. Often this has less to do with the way a building or a district is assembled and more to do with how we read it…Experience is in the details. If a place tells a story, then the details of that place make the story interesting. The smallest elements-from manhole coves to water features-conspire to create a dynamic, authentically human environment.

What story do these signs tell? What authenticity do they conspire to create, with their approved colors from a gated community on a bluff? Can the gestalt of the minimalist object be achieved from your car, at speed, as you pass the mall, or do you have to turn in?
This ID8 quote, too, turns out to have more to do with how I read it:

In 2002, the day they flipped the switch, architect Gustavo Bonevardi explained how he and John Bennett arrived at their solution for what became the Tribute of Light World Trade Center memorial:

Because I cannot look at the Newport Center signs, and their proportions, and their void, and not see the World Trade Center.
But maybe that’s just me. I invite you to visit, view, linger, think, and pause at this installation of new work and pursue your own authentic, dynamic, human experience.
Previously, unexpectedly related, c. 2002: On reading (between) the lines
On’s Location