W. T. F.???
The National Mall is ringed with Smithsonian museums, none of which seem to have programmed a piece of public art or sculpture outside their own walls in at least a generation.
Washington DC has no public art program to speak of. And that’s not just because you can’t call those insane “parades” of paint-a-pandas and paint-a-donkey/elephant “art”; they’re tourist marketing, pure and simple.
And yet. Another such parade seems to have miraculously materialized on the District of Columbia’s streets. A parade of hearts. There was one in front of my family’s hotel when we picked them up to do the tourist circuit. There were three along our walks to the Washington Monument, the Lincoln Memorial, and the Smithsonian’s American History Museum. 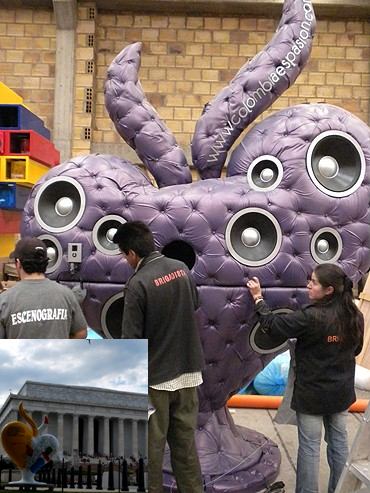 Each is painted with quotes and factoids about Colombia, the country. They turn out to be part of Colombia es Pasion, an official [Colombian] government branding campaign designed, according to a regurgitated press release in the Examiner, “to educate and show the world the true Colombia.” In addition to the three we saw, there are 37 other giant fiberglass hearts which “appear along city streets in high-traffic areas. They will be hard to miss, standing eight feet tall, featuring colorful, hand-painted designs that showcase a particular aspect of Colombia that may surprise visitors.”
Visitors and locals both. Who the hell gave this thing the green light? The campaign was created for the Colombian government by BBDO Sancho, the Colombian subsidiary of the global ad agency, and was designed by another Bogota agency called Sistole. But there is absolutely no one–no agency or overseeing organization or authority from Washington DC or the US mentioned in the press release/article.
I can think of approximately one thousand art projects that would be better to see on the streets and plazas of Our Nation’s Capital before a bunch of South American heart-shaped billboards.
So the only way I can make sense of their presence is that Washington DC is now an open, international platform for sculpture, art, whatever! The way Houston has no zoning laws, and you can build whatever the hell you want next to whatever the hell is already there, Washington’s many complex, overlapping bureaucracies have thrown out the rulebook and thrown open the streets for whatever cockamamie scheme you’ve been cooking up. Bring’em down and set’em up!
An invitation to Discover Colombia Through Its Heart [examiner.com]
Colombia llegó a Estados Unidos/ Colombia came to the US [and just dumped their marketing bullshit on our street corners] [colombiaespasion.com, google translate]