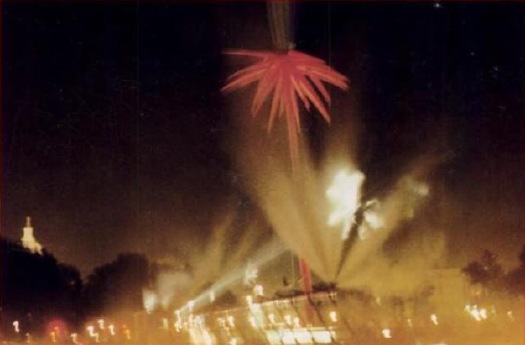 While we contemplate the Colombian Heart Attack that has befallen Washington DC, it might be worthwhile to remember the good old days, such as they were, when the National Mall was the site of ambitious public art projects. Projects like Centerbeam and Icarus.
Centerbeam was the result of a 22-artist collaboration organized by MIT’s Center for Advanced Visual Studies under the leadership of the artist Otto Piene. It was a 144-ft long 128-ft long [in DC] steel sculpture resembling a radio tower on its side, which served as a platform for an array of artistic deployments of cutting edge technologies, including laser projections on steam, holograms, neon and argon beams, and electronic and computer-generated music. And giant inflatable sculptures.
After a highly acclaimed debut at Documenta 6 in 1977, Centerbeam was reinstalled on the Mall during the Summer of 1978. The site was the open space north of the newly opened National Air & Space Museum, and directly across the Mall from the just-opened East Gallery of the NGA [where The National Museum of the American Indian now stands].
Centerbeam gave nightly performances/happenings/experiences throughout the summer, culminating in two nights’ performance of Icarus, a “sky opera” in steam, balloons, lasers, and sound created by Piene and Paul Earls.
Based loosely on Ovid, Icarus cast Piene’s 250-ft tall red and black flower-shaped sculpture as the title character; another red anemone-shaped balloon was Daedalus, and Centerbeam was the Minotaur.
Centerbeam was officially sponsored by the National Park Service, which has jurisdiction over the Mall, and the Smithsonian. The directors of both the NGA [Carter Brown] and the Hirshhorn Museum [Abram Lerner] are thanked for their encouragement in MIT’s 1980 catalogue of Centerbeam, but no Smithsonian art museum–and no art curator–appears to have been involved in the presentation of the work. Most of the coordination was handled by Susan Hamilton, who worked in the office of Charles Blitzer, the Assistant Secretary for History and Art. In fact, the Air & Space Museum’s director and staff gets the most effusive praise and seems to have been the most closely involved with the project, even to the point of using the NASM as Centerbeam‘s mailing address.
The Washington Post did not review Icarus, and in the paper’s only feature on the opening of Centerbeam, Jo Ann Lewis cited anonymous critics who “generally saw it as a big, endearing toy, but not art. There seems no reason to amend that conclusion here.”
Of course, no one cares what the Post says about art, and Piene and his CAVS collaborators probably did not mind the absence of more traditionally minded art worlders. Since his days as a founder of Group Zero in the early 1960s, Piene had been self-consciously seeking a path that would lead art out and away from the rareified, precious object fixations of collectors and museums.
Group Zero was ahead of several curves, and their place in the story of conceptualism, minimalism, Arte Povera, and other important developments of art in the 1960s is getting a boost. And Piene’s work looked pretty nice and strong in Sperone Westwater’s very fresh-looking Zero show last year. Are Centerbeam and Icarus really just wonky art/science experiments, examples of the played out model of unalloyed, Utopian technophilia that spawned earlier collaborative dogpiles like the Pepsi Pavilion at the 1970 Osaka World’s Fair?
Or is there a real history of “real” art by Piene and his collaborators that needs to be looked at again? Despite the apparent indifference of its official art world at the time, was Washington DC actually the site of some significant artistic production that did not involve freakin’ Color Fields? Inquiring balloon-sculpting minds want to know.