First things first, yes, I’ve heard the footsteps of the Tate’s awesome, new, online exhibition/project, the Gallery Of Lost Art behind me, and I will be trying to wrap up the search for the lost Short Circuit Johns flag painting very soon. At least soon enough to give them time to write my triumphant detective work into their essay. Ahem.
Meanwhile, let’s give credit where it’s due, because the Tatefolk have lured SFMOMA’s infrared imagery of Erased de Kooning Drawing out and onto the net.
Last year at CAA, one of SFMOMA’s design & web people Chad Coerver talked about the debates over whether or how to present the wealth of information in the Museum’s Getty-sponsored Rauschenberg Research Project. Whether to publish new infrared imagery of EdKD, for example, which might alter the way people perceive the object in ways the artist did not want or anticipate.
I guess they figured it out, because not only does the GOLA have it, the IR image is the teaser today on SFMOMA’s tumblr. [via wiblog and MAN]
Or maybe they’re still working on it. SFMOMA’s Erased De Kooning Drawing page has this footnote:

The use of advanced imaging technology and its implications for our understanding of Erased de Kooning Drawing will be explored fully through SFMOMA’s Rauschenberg Research Project, a four-year in-depth research program that will result in an online catalogue, slated for launch in summer 2013.

Carry on, then!
But the page also has this description, which seems to reflect a fuller, and different, understanding of the work than what was discussed during Rauschenberg’s lifetime:

After Rauschenberg completed the laborious erasure, he and fellow artist Jasper Johns devised a scheme for labeling, matting, and framing the work, with Johns inscribing the following words below the now-obliterated de Kooning drawing:
ERASED DE KOONING DRAWING
ROBERT RAUSCHENBERG
1953
The simple, gilded frame and understated inscription are integral parts of the finished artwork. Without the inscription, one would have no idea what is in the frame; the piece would be indecipherable. Together the erased page, inscription, and frame stand as evidence of the psychologically loaded deed of rendering another’s artwork invisible, enacted in the privacy of the artist’s studio.

Which, hmm. It seems vital that Johns’s central role in creating EdKD is acknowledged. I’d even argue it was equal, or equivalent, his precisely drawn marks the precise counterweight to Rauschenberg’s vigorous erasures. And the title, even the titling, and thus the conceptual framing, is Johns.
Or at least it was. But the gilt and the current matting, has been changed, once and maybe twice or more, since Johns and Rauschenberg broke up. So it is Bob’s. And the evidence of this evolution can be seen even more clearly, thanks to the Gallery of Lost Art’s zooming feature, on the back of the work. 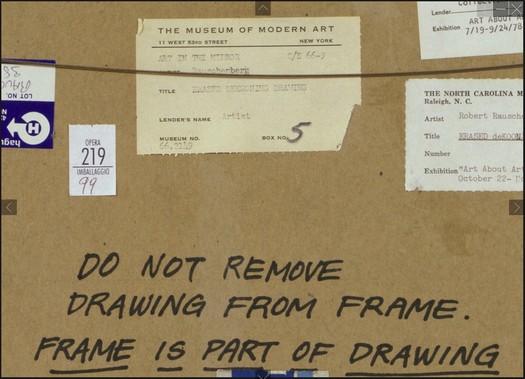 Though Erased de Kooning Drawing was begun in 1953 and [apparently] completed by/with Johns in 1954 or 1955, it was only exhibited publicly in 1964, first at the Wadsworth Atheneum, and then at the Guggenheim. At that time, the work’s stated dimensions were smaller, and its medium was listed as “pencil on paper.” It turns out, though, that the earliest registrar label on the back is not from 1973, as I’d previously written, but from 1966 [above], from a Gene Swenson show at The Museum of Modern Art called, “Art in the Mirror.” Swenson’s show traveled, but I haven’t figured out where. Emilio de Antonio filmed an Erased de Kooning Drawing without a mat or frame in 1970, though. 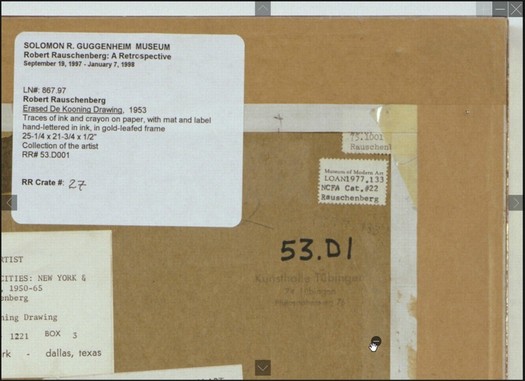 And check this out. It’s the upper right corner of the picture’s back, where a 1975 registrar sticker from [MoMA? It does look an awful lot like the 1977 sticker below it, though I can’t find a show from the Modern which might have included EdKD], I say, where a 1975 sticker is taped over. And that tape is of a certain vintage, as evidenced by the yellowing tape on top of it. And then BAM, huge tape, with the huge Guggenheim sticker from the 1997 retrospective on top of that.
In discussing the long hidden De Kooning sketch on the reverse side of the sheet, GOLA notes that the conservators had removed the drawing from its original backing board in 1988. And the current gilt frame setup was in place by Walter Hopps’ 1992 Early Rauschenberg show.
So whatever happened before de Antonio’s 1970 documentation, who knows, but Rauschenberg altered the work physically at least twice between 1975 and 1992. And while the simple gilded frame, etc. are integral to the work now, they weren’t around when Johns was working on it.
I guess I’ll keep up this level of obsessive stickergazing until SFMOMA drops its database on us next summer. Stick around.