I’m surprised to not be hearing or reading more about “Here and There,” Peter Coffin’s show at the Hirshhorn, curated by Kelly Gordon. 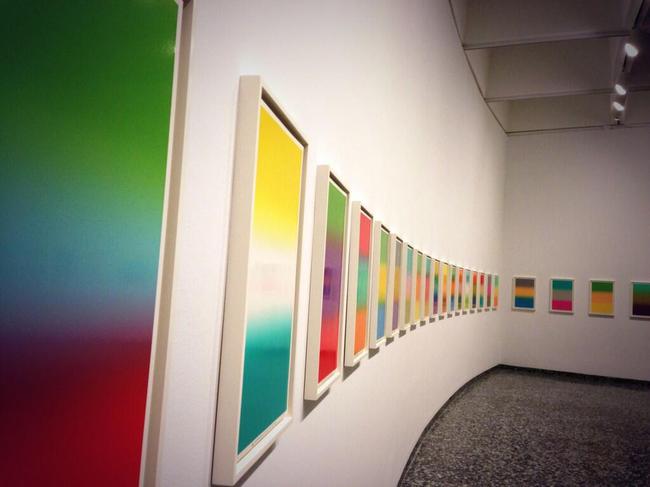 Hirshhorn installation view via @bluelikechagall
Maybe it’s the show’s unusual format; with seven works, it’s bigger than a project, but smaller than a mid-career retrospective, and Coffin’s works are dispersed throughout the museum (and one online). Jane Holzer’s copy of the eyecatching Untitled (Spiral Staircase) is in the courtyard. And my absolute favorite of Peter’s work, Untitled (Designs for Colby Poster Company), is on view, all 80 posters, in the elevator landing. [The Hirshhorn apparently bought Colby Poster in 2008, which was definitely the right time to get it, but the checklist and walltext says these particular examples are Collection of the Artist. I hope there’s a trivial explanation for this, especially now that Colby Poster Company is gone. (RIP). Also, has it ever been shown in the museum before? I don’t think so. I would’ve put that thing up at the end of Warhol’s Shadows instead of that Estate Edition Flavin wall. Just sayin’.] 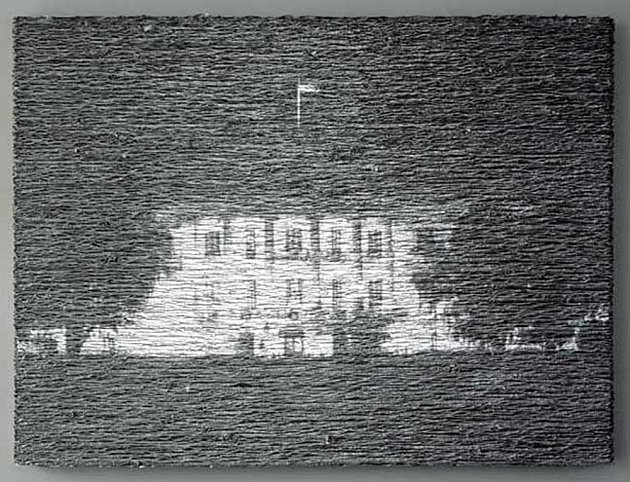 Donald Moffett, Aluminum/White House Unmoored, 2004, image via marianneboeskygallery
Anyway, the big news is the center of the show, a [commissioned?] project, Untitled (Smithsonian Hirshhorn Museum), 2013, a 12-minute animated projection/installation on a dozen or so works from the collection. It’s not so much site-specific as institution-specific and work-specific; each projection is timed and tailored for a particular painting or drawing.
When Donald Moffett first showed projected still video landscapes on paintings in 2003 (above), his silver and gold monochrome canvases served as uneasy, even dubious screens. Coffin, though, has selected a wide mix of figurative and abstract work onto which he projects Jeremy Blake-like animations that overlay their own representational/abstract painterly arguments. 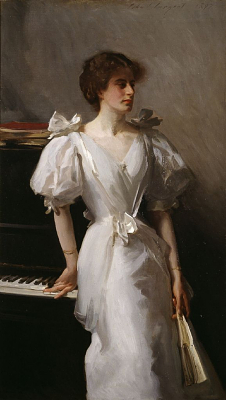 For Jasper Johns’ pastel 0-9 (1962), for example, Coffin articulates each collapsed digit in turn, rendering the illegible temporarily legible. For Sargent’s portrait of random London shipping heiress Catherine Vlasto (1897) [left], Coffin highlights different elements of the picture, including the piano keys, her décolletage, and the gilt frame, referencing the viewer’s own reading process, the very museum experience that has been digitally usurped.
I’ve watched the program through several times, and I got to where I can identify and anticipate favorite passages, moments where the original artwork and Coffin’s projected images work well together (or against each other.) The last 5 seconds or so of the video clip above, for example, where Coffin makes de Kooning’s painting seem to blur in and out of focus, is a standout that deftly addresses the painting’s abstraction.
Overall, though, Coffin’s various animations don’t seem designed for contemplation. Instead they fall under the rubric Gordon calls, “serious fun,” a new, different, and “subversive” way of looking at traditional artworks. I imagine that for many viewers, especially those who wander in from Air & Space, Coffin’s 12 minute loop will be several times longer than they’ll spend strolling through galleries where they can actually see the paintings. In that sense, they’re the apotheosis of a certain kind of entertainment-centric museum-going experience, just what the curator ordered.
Peter Coffin: Here & There runs through Oct. 6, 2013 [hirshhorn.si.edu]