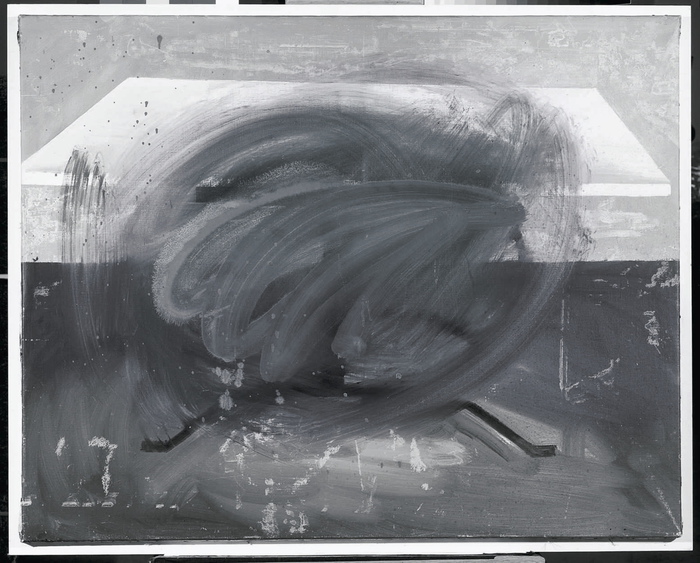 This is a great photo, btw. I love the edge, the space, the painting’s objectness. I assume it’s old, pre-frame, but I don’t really know; and the site I ganked it from didn’t seem to have any awareness, much less answers. Anyway, it’s here on purpose.
I’m not sure when I knew that the blur in the center of Gerhard Richter’s Tisch/Table (1962, CR:1) isn’t a brushstroke, but a smear, but I didn’t give it any thought until I started looking hard at Rauschenberg’s work on Erased deKooning Drawing. Then it completely changed for me.
The first time I saw it in person was 2002. Richter told Rob Storr that he had “canceled the painting by blurring.” I read Table‘s blob alongside the brushy blur of the early photopaintings. And those soupy loopy Vermalung paintings whose AbEx-style gestures preceded but didn’t exactly prefigure the squeegees.
But that’s not what’s happening. 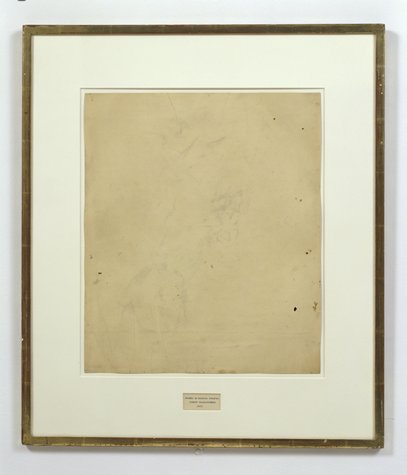 In trying to understand what Jasper Johns did to Erased deKooning Drawing, I also had to figure out what Rauschenberg had done:

At just that moment I read John J. Curley’s essay, “Richter’s Cold War Vision,” in Gerhard Richter: Early Work, which tied them together:

Richter’s Informel-esque brushstroke was not painted over the image of the table (as some have suggested), but was the product of erasure. The artist attacked the canvas with a solvent (perhaps turpentine) after the initial image was already painted. The new mark has diminished the original painted surface, leaving traces of bare canvas showing through.

But as with Rauschenberg, this is not negation; cancelation is not rejection. [Richter would later designate Table as the first work in his Catalogue Raisonné, even though it is not.] As Curley wrote, the erasure “naturalizes a false realism” in Tisch; its abstract disruption provides cover and credibility for the table’s “off-kilter” representation and “structural impossibility.” Erasure becomes “the crux of both the table and the painted gesture.” 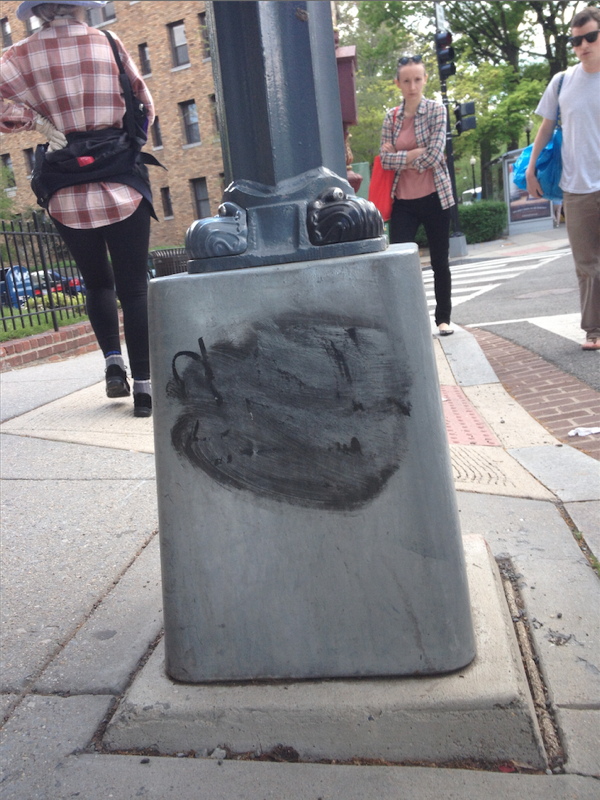 Well that blew my mind. I’ve ended up thinking about Tisch all the time, at first because of the blogging, and then the Destroyed Richter Paintings project. But then mostly because there’s a lamp post near our place in DC that I pass almost every day on my way to the train or the store. It has a basic graffiti tag that someone tried to erase–I was about to say unsuccessfully, but I think it looks a hundred times better like this.