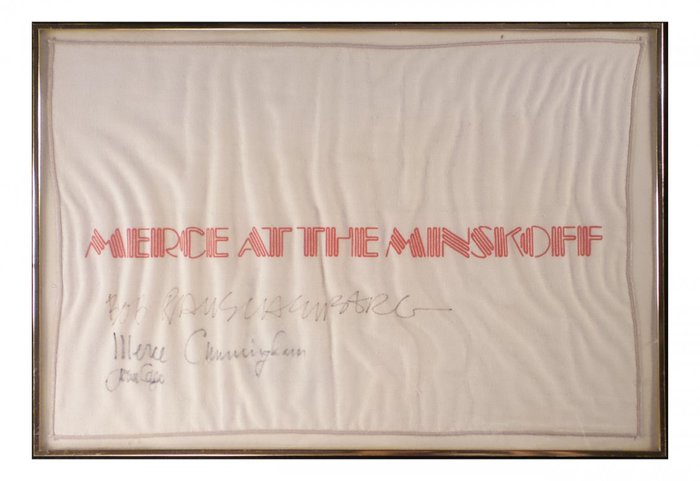 Sometimes an object has its own logic.

A few days ago I saw an unusual auction listing. It was described as a “textile” with the title, “Merce at the Minskoff,” and it was signed by “Bob Rauschenberg, Merce Cunningham, and John Cage.” But the description was cursory, and there was no image. When I called, the small downtown auctioneer couldn’t describe it, but they assured me they’d post the image soon.

This textile was clearly related to Merce and the company’s week-long performance at the Minskoff Theater in January 1977, the only time they performed on Broadway. But what would be signed by these three?

Then I got wrapped up in other stuff, and confused the sale date, and long story short, I missed the auction this morning, and I lost a chance to buy what appears to have been an autographed commemorative hand towel.

So for now getting the designer of the Merce at the Minskoff poster to sign this towel requires not just the acquiescence of Mr. Johns, but the co-operation of the as-yet-unidentified owner/custodian of the towel.

But it will happen. Or at least it must. Because when an object has its own logic, your only viable option is to endeavor to realize it as quickly as possible. 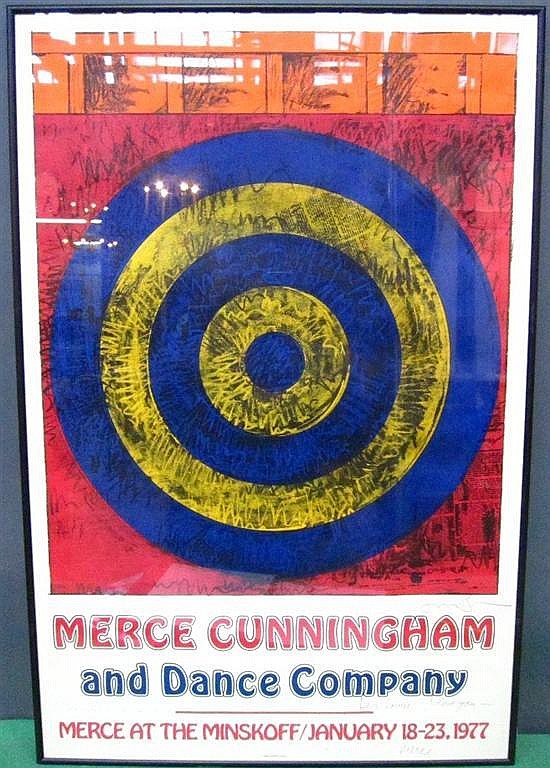 FROM THE ESTATE OF LOUISE NEVELSON HELLO: “Signed Jasper Johns lower right and inscribed, ‘Dear Louise, I love you, Merce”

Lot 194: Textile, “Merce and the Minskoff”, sold for a measly $125 to someone now carrying the weight of future Art History on his or her shoulders [roland/liveauctioneers]
Apr 26, 2010, Norwalk, CT, Lot 357: AFTER JASPER JOHNS (AMERICAN, b.1930): Signed colored poster. [braswell/invaluable]

UPDATE: This post was edited soon after publication to accept responsibility for an object’s realization, even though it is not presently within my control to do so. I must and will do what I can.
APRIL 2016 UPDATE: I was discussing this work with my wife recently; she takes issue with this entire project of asserting art status upon an object beyond my control or ownership. She questioned my claim thus: “Why didn’t he sign it? If he designed the poster, it can’t be for lack of opportunity. That’s the logic of this object: that he didn’t sign it.”
Reader, I married her.

UPDATE UPDATE: Several months ago I received updated information about the towel and its situation. Upon renewed contemplation of the logic of this object, I determined an appropriate course of action, and followed it. As Jasper Johns wrote, “Take an object/ Do something to it/ Do something else to it [Repeat]” And now here we are. All of those involved have my sincere gratitude and respect. I am psyched to report that as of May 4, 2018, this work has been completed.