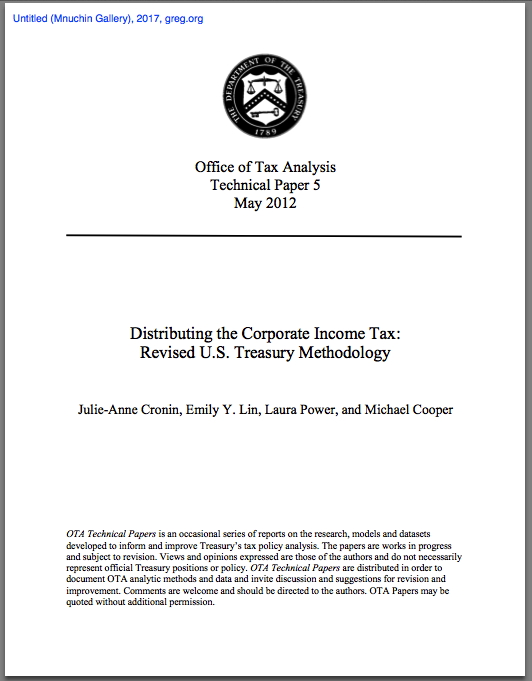 Untitled (Mnuchin Gallery), title page, 2017, 34-page pdf
Untitled (Mnuchin Gallery) is a 2017 work comprising a 2012 technical paper by four economists in the United States Treasury Department’s Office of Tax Analysis. The paper explained a revision to the Treasury’s methodology for analyzing the impact of corporate income taxes on companies, owners, and workers. It did this by examining the type of income (capital or labor/wage) and the distribution of those income sources across the entire taxpayer population. It was found, for example, that the top 1% of households accounted for 49.8% of total capital income, but only 11.5% of labor income.
The purpose of the study was to understand the impacts of tax-related policies and forecasts more accurately, and in greater detail, in the hope that more accurate data will lead to better-crafted policy and legislation.
Treasury Secretary Steven Mnuchin has spent several months making claims about lowering corporate income tax rates that are directly contradicted by the findings of the study, and the calculations of Treasury Department’s career economists. So he had the study removed from the US Treasury website, and a spokesman has disavowed the methodology as “the dated staff analysis of the previous administration.” No alternate methodology or analysis has been offered.
Steven Mnuchin, like his father Robert Mnuchin, was a partner at Goldman Sachs. Like is father, he collects modern and contemporary art. One Mnuchin is in the business of conferring relevance on objects by exhibiting them, the other by suppressing and disappearing them. This work is a family reunion of those two tactics.
Untitled_Mnuchin_Gallery.pdf [34pg, pdf, via wsj]