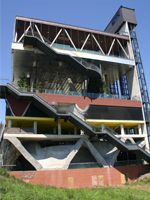 If the last cremation you watched was in Diamonds Are Forever, now’s your chance to get up to speed and stick it to Islamic fundamentalist terrorism at the same time.
In the event one of the many death threats he received over Submission, his short film decrying abuse of Muslim women, panned out, Dutch filmmaker Theo Van Gogh said he wanted a public cremation. Unfortunately, he’s getting his wish today at 1700h Amsterdam Time, CET, (or 1100 EST).
The Nederland 2 TV network is carrying the event live online, starting at 1650h, which is in like an hour.
Related [??] [Montgomery Advertiser, via Defamer]: “Hagman has stipulated that upon his death, he wants his body to be ground in a wood chipper and scattered in a field, where wheat is to be harvested for a cake to be eaten by his friends and family one year later….” [and if that’s not enough to make you want to live forever, read on…]

In addition to the shooter/stabber, Dutch police and intelligence officials have arrested eight other men ages 19-26 in connection with the murder of filmmaker Theo Van Gogh. Several of them had been detained before in terrorism-related investigations.
Meanwhile, the man caught at the scene is being questioned for terrorist ties; he reportedly had a testament with him, “indicating he anticipated being killed in the attack.”
Both politicians and the Dutch public are agitated over what may be the country’s first incident of Islamic terrorism. The AP reports a public cremation is being planned Tuesday for Van Gogh, which seems like a pretty showy sendoff. Should placate the Hindus, though. [According to Dutch news, he talked widely about having a big funeral party in case any of his numerous death threats panned out.]
See the map of Linnaeusstraat in eastern Amsterdam where Van Gogh was killed. [nu.nl]
Police Arrest 8 Tied to Suspect in Killing of Dutch Filmmaker [NYT]
Radical Questioned in Filmmaker’s Death [AP/NYT, ‘Radical’? How about ‘Suspect’?]
Van Gogh bereidde weken geleden eigen uitvaart voor [nu.nl]