Do you find yourself wanting to talk about Group Zero, but the only names you can pronounce are Fontana and Klein [and Westwater]? Do you ever call galleries you’re about to walk into, just to hear them say the artist’s name? [I just asked at the desk, it’s von HILE.]
You may be suffering from Gigli Syndrome, a condition where you avoid saying an artist or designer’s name because you’re not sure of the pronunciation. Bennifer can’t cure all possible outbreaks of Gigli Syndrome, any more than Nomi Malone could inoculate us against the dangers of unknowing mispronunciation, Versace Syndrome.
After typing [well, cut-n-pasting] 0100101110101101.org yesterday morning, I realized a universal cure to either condition is impossible. Americans will never switch to Van Gohchhhh, and Thaddeus Ropatch may never give you more than 10% off, but that doesn’t mean we shouldn’t do all we can to treat and prevent. 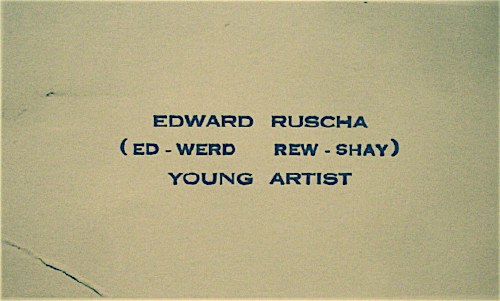 So inspired by my friend Sam, who once helped me avert disaster at Lever House [it’s A-B Rosen, not Abby], and as a tribute to the young artist who once printed up business cards reading, “Ed-werd Rew-shay”, here is a quick roundup of high-risk artworld names and their correct pronunciations by curators, interviewers, and even the artists themselves:

Some build on each other; once you know Bas Jan Ader [Boss Yan Adder], you can do Jan Dibbetts, Jan Schoonhoven [Skoon-ho-ven], Christian Jankowski [Yan-KOFF-ski], and so on. If your favorites aren’t on the list, please feel free to send them along.