While reposting those old Daddy Types entries about the US’s imprisonment of Japanese American citizens, I came across a couple of  images of Topaz, Utah that were new to me. They were added to the University of Utah Library’s collection in 2012, and originated in a 1987 documentary about Topaz produced by KUED, the local PBS station.

The top image is sort of mundane, but the form of this make-do scrapwood sign just sticks with me. That might be an actual blackboard, or maybe not.

It doesn’t stick with me like the object in this image, though. Four unidentified people standing in front of the Service Flag for the “community” of Topaz, which included one star for each detainee serving in the US military. 325 at the time this photo was taken. Soldiers serving while their families were in prison because of politicians’ racial bigotry and fear.

KUED Collection of Topaz Camp photographs at the University of Utah Library [lib.utah.edu]

I’ll be honest, when I first heard that the ICE immigrant family detention centers full of Central American refugee kids and moms had animal-themed cell blocks like red bird and blue butterfly, I imagined they were using Eric Carle drawings, and I got a dark, blogging thrill.

But no. The South Texas Residential Center in Dilley, the largest family detention center in the world, run by the for-profit prison contractor, Corrections Corporation of America, was too cheap to license Carle’s work, and just used random clip art instead.

Also, the government’s punitive detention of these people is shameful, and it can’t end soon enough. Most of these families are fleeing war, violence, and abuse in their home countries and have already qualified for refugee hearings the US, but remain in these remote prisons, guarded by actual prison guards, temping in khakis and polo shirts, as a feeble deterrent to other refugees.

I resisted comparing ICE’s outsourced prisons to the desert detention centers Japanese-American families were forced into during WWII, even when I saw Bob Owen’s photo in the San Antonio Express News, which is a damningly straight-up evocation of Dorothea Lange’s photos of the War Relocation Authority’s internment camp at Manzanar, California.

Ansel Adams also took photos at Manzanar, which he published in a book, Born Free And Equal, alongside a text that reads today as disturbingly upbeat in its praise of the gumption and loyalty of American citizens forced into desert prisons. I’ve always viewed Adams’ project as a protest, a condemnation of the injustice visited upon Americans because of the racist fears of their neighbors and political leaders. But that is over-optimistic hindsight. Re-reading Adams’ text now is pretty depressing. To think that it’s all the Constitution and fundamental principle that wartime white America could handle at the time.

At least it helps make sense for how this country could get so cross-wise with its own professed ideals today; we really have not changed that much at all. And when I tried to put some evolved distance between the ironies of Adams’ treacly government-reviewed-and-approved fluffing and this account from inside Dilley, I couldn’t. So here it is:

While children wait for their mothers to talk to lawyers and legal aids, they are usually watching kids’ movies dubbed in Spanish, namely Rio or Frozen. The children of Dilley, like children everywhere, have taken to singing Frozen’s iconic song “Let It Go.”The Spanish-language refrain to the song “Libre soy! Libre soy!” translates to “I am free! I am free!” It’s an irony that makes the adults of Dilley uneasy. Mehta recalls one mother responding to her singing child under her breath: “Pero no lo somos” (But we aren’t).

Dave Masaharu Tatsuno ran the dry goods store at Topaz Mountain, where Japanese Americans from the Bay Area were imprisoned during WWII. And he took a bunch of 8mm home movies, using color film which he’d pick up on buying trips back east. And then he edited the movies together into Topaz Memories [or Topaz, which is how it was listed when it was accepted onto the National Film Registry], a film/presentation which he gave at organizations around the country after the war.

Or maybe beginnin the 1990s, I haven’t watched the end of the local PBS documentary on Tatsuno, produced after his death in 2006, to figure it all out yet. I was so amped up by these detainee-made sleds at 20:05, I had to post them right away. That’s Bill Fujita, Tatsuno’s brother-in-law, pulling David Fujita and Tatsuno’s oldest son Sheldon in 1943.

The Tatsunos were expelled from their home when Dave’s wife Alice was nine months pregnant, and their second son Rod was born at the Bay Area assembly/processing center at Tanforan race track. Their daughter Arlene was born at Topaz.

My grandfather was a teacher in central Utah and volunteered to help teach the children there. He was appalled that these good people were interned (imprisoned) and admired them for how hard working and intelligent they were, and also for the patriotism to put up with this. I never knew this until I read his journal after he passed.

Ironically, he was a German immigrant whose travel to America was sponsored and encouraged by his Jewish employers who seeing the infant Nazi movement told him that if they were his age they would go to America.

They lent him the money on his word that he’d pay them back, which he did. I don’t know what happened to them.

Back to Topaz, that place is literally in the middle of nowhere desert.

[Originally published on Daddy Types on March 29, 2013, as Topaz Mountain Sleds by Dave Tatsuno and Bill Fujita, with a relevant comment included here.] 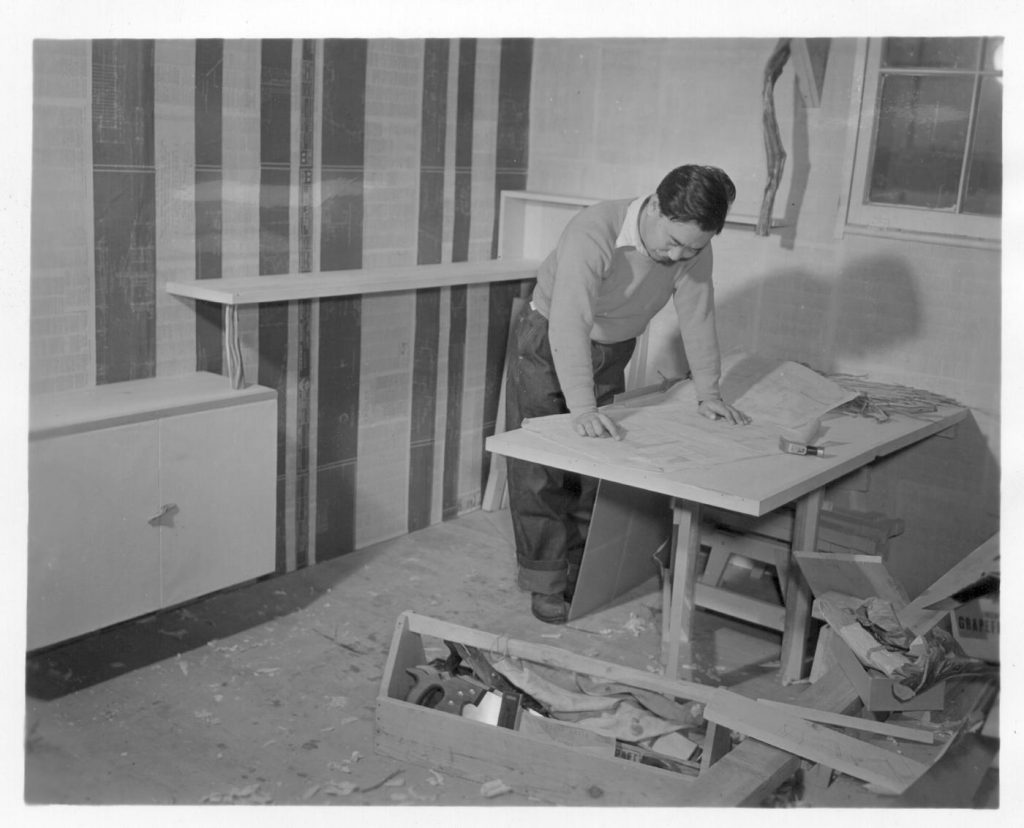 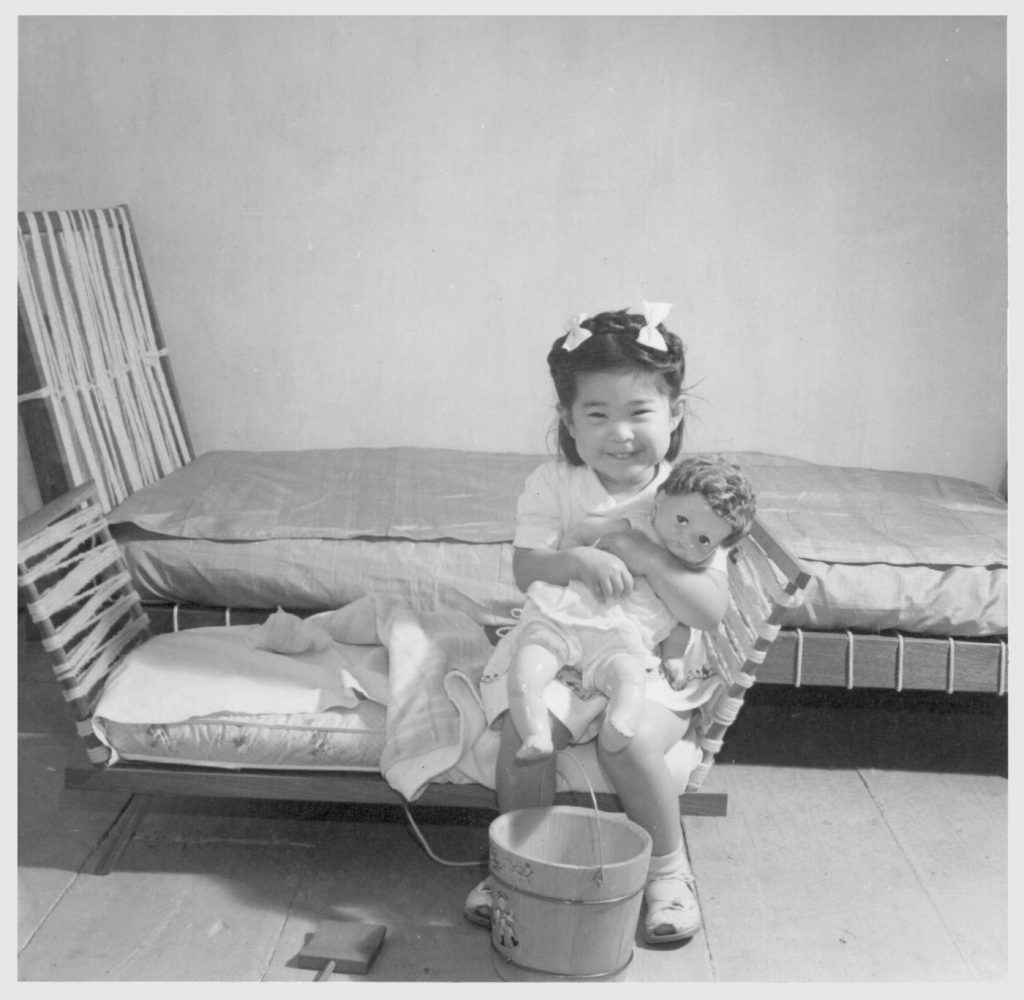 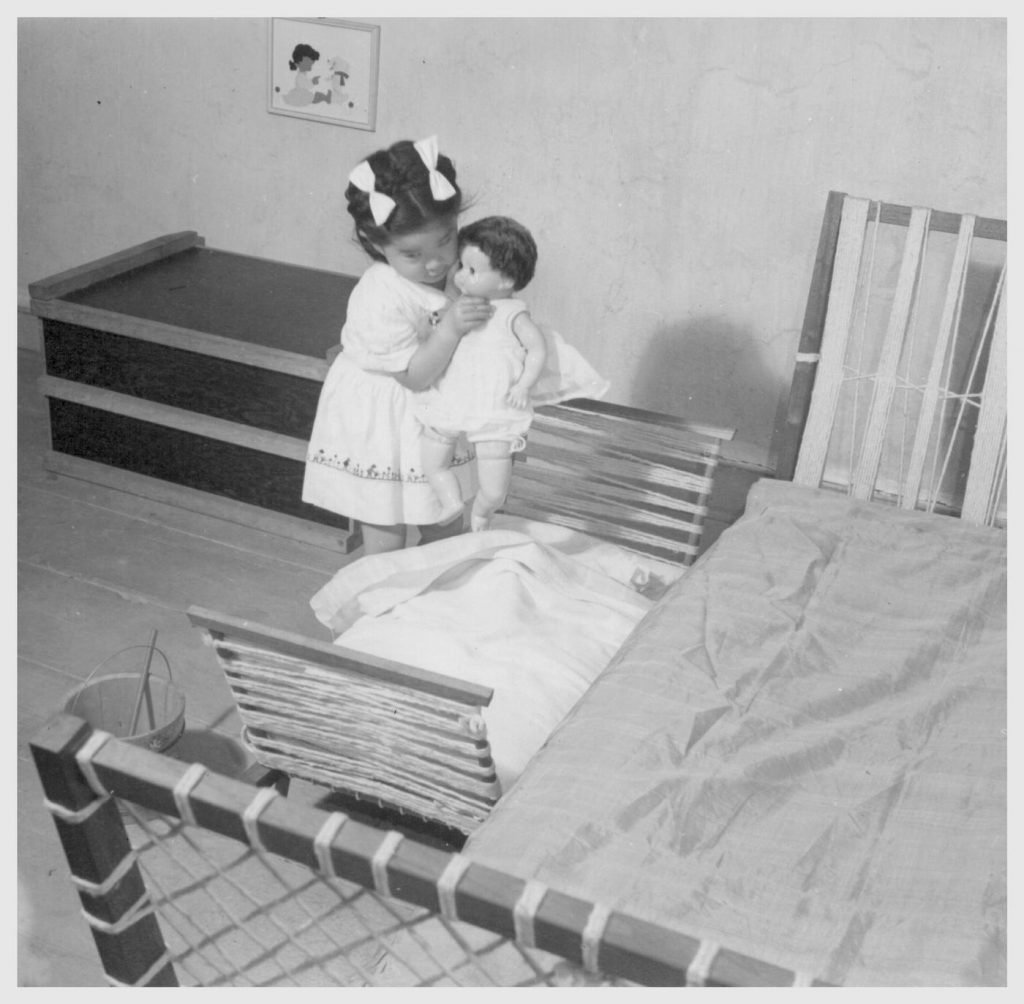 In WWII, Japanese Americans were forcibly removed from the west coast, stripped of basically everything they couldn’t carry, and imprisoned in inland internment camps, rows of tar paper barracks in the desert surrounded by barbed wire fences and guard towers.

Everything else, they had to build themselves. Here are a couple of photos from the War Relocation Authority collection at the National Archives of the preschool playground at the Tule Lake Relocation Center in Newell, CA.

Looks like they had better scrapwood at Tule Lake than at Topaz Mountain in Utah. Or maybe better carpenters. Still, I’d add that unfinished wood slide to the list of injustices perpetrated against loyal American citizen children by their government.

It was a very sad time in our history. My mother was interned at Tule Lake, and to this day, she can’t talk about it without crying. It impacted her life, and therefore, the lives of her children and our children.

[Originally published on Daddy Types on November 28, 2011 as Scrapwood Playground at Tule Lake Internment Camp. I also brought over a comment for this one.]

The photo blog on The Atlantic has been running extended looks back at images from World War II. Today’s theme: Japanese-Americans forcibly removed from their homes and businesses and shipped to internment camps in the middle of the freakin’ deserts.

The caption on #39 just bummed me out: “Nursery school children play with a scale model of their barracks at the Tule Lake Relocation Center, Newell, California, on September 11, 1942.” Their barracks.

On the bright side, check out the sweet little pine plank nursery chairs they’re standing on. How many civil right’s a brother gotta give up to score a few of those, I wonder?

America’s imprisonment of its own citizens because of racial bigotry during World War II has been of great interest to me since discovering Born Free and Equal, Ansel Adams’ self-published photobook of Japanese Americans detained at Manzanar, in the early 1990s. It always felt like important history that must be faced and not forgotten. Now, of course, it is a crime being surpassed and magnified, with families being torn apart and children fleeing for their lives being subject to state-sponsored terror at a scale this country hasn’t seen in almost a century, and all for the accumulation of Mautocratic political power.

It is not a sufficient response by any measure, but I am republishing a series of blog posts here which I made over the years at Daddy Types, the weblog for new dads, which I ran from 2004 until my CMS broke late last year. On DT I often wrote about the overlooked or forgotten histories and objects of parenting, with a focus on modernism, design, DIY, and dad-related projects. That included frequent posts on the material lives of Japanese American children imprisoned in detention camps during WWII, including the attempts to provide  kids an approximation of a normal environment through schools, playgrounds, and domestic spaces built out of scrap lumber.

Here they are in chronological order. The first is a January 2009 post on the pre-school and playground at Topaz Internment Camp outside Delta, Utah. [2009 is when I learned my grandfather had helped build the Topaz detention center as part of the CCC.]